Asphalt shingles are the primary choice of homeowners for their roofs in the United States. The key value that asphalt shingles provide is the water shedding ability to protect the home and overall aesthetic appearance.

There is a logical path to integrating rheology into asphalt coatings, in a similar matter to the way performance-based specifications for paving asphalt have evolved. The difficulty when working with asphalt coating is that the refinery produces flux that then is oxidized by either the shingle manufacturer or a third party.

The asphalt coating properties are what drive the requirements and there is limited agreement in the industry to what the rheological requirements would be beyond empirical softening point, penetration and the asphalt viscosity.

We attempt to integrate rheology into the asphalt coating evaluation in this article.

Asphalt roof coating is a key component in high-quality shingles for the roofing market and should be manufactured to address handling and installation issues of the contractor as well as water shedding and beauty for the homeowner. The asphalt roof coating is the glue that combines all the components of a shingle – the fiberglass mat, the granules, fillers and tape. Shingle manufacturing plants make roof coatings to a consistent specification based on the following:

The other components of a shingle – filler, granules and mat – most often come from regional sources and can differ widely. Other factors that influence the shingle forms from various manufacturers include the types of products they market, processing conditions and the specific performance desired based on the shingle warranty. With these subtle differences, each manufacturing plant will require an asphalt coating that may need to be subtly different – i.e. more aggressive and stickier to glue the dry components together or less aggressive and firmer so that the individual shingles don’t stick together – to achieve the desired level of performance.

Add all those differences in incoming raw materials, shingle form, processing conditions and desired level of performance with the regional differences of raw material asphalt supply, and it is easy to understand the different asphalt coating specifications that each individual plant needs to follow to make a consistent, performing, quality shingle.

Traditionally, asphalt coatings have been characterized using empirical data that help the coating manufacturer provide a product that meets the properties desired by the shingle manufacturer. These measures have served the industry well over time, but they do not necessarily predict the performance of the shingle. These historical properties include softening point (ASTM D36), penetration @77°F (ASTM D5), viscosity @400F (ASTM D4402) and COC flash (ASTM D92).

Other properties have also been specified, including stain and durability, which are more in line with performance. Staining potential is a key measure of how visually the shingle may perform. Durability is often characterized by weathering (ASTM D4798) to assess how long a coating may perform on a roof. A performance-based set of tests is desirable to the shingle manufacturer that describes more closely the fitness for use criteria they may have. This is where rheology will play a bigger part in the future.

Rheologic tests provide the asphalt coating manufacturer a guideline of the properties desired and relate sticking in the bundle, granule adhesion and tear strengths to actual shingle performance. Each shingle manufacturer will eventually set its specifications according to these or other related FFU (fitness for use) requirements.

Where do we start with rheology? The SHRP (Strategic Highway Research Program) was a program funded by the U.S. government to address research needs for better performance of the nation’s highway system. The asphalt program was a significant part of the overall program intended to better understand and characterize asphalt materials and their ultimate performance in service in a pavement structure. As part of that research, the asphalt paving industry did very extensive rheologic testing to characterize and grade different asphalts. This program was very successful in developing performance-graded asphalt binder specifications that all paving suppliers follow today.

The roofing industry has looked at the results of SHRP and recognized some very good science that could be used for roof shingle binders. Because roof shingle binders are much stiffer than paving binders, rheologic testing parameters will have to be changed to reflect the material differences. But many similar techniques should be able to be used.

The goal in this testing has been to find appropriate testing protocols that can characterize the coating binders and relate those rheological tests to traditional tests, such as softening point and penetration, which are meaningful to the shingle performance. An additional goal has been to unite asphalt coating manufacturers around the establishment of a consistent test protocol that can easily be performed.

The AI and Paragon labs have tested a variety of asphalt coating samples and created rheologic data that can be related to the historical parameters of softening point and penetration.

In 1954, Van der Poel found that the penetration value was related to stiffness or modulus at 0.4 seconds of loading time for conventional asphalt binders. Gershkoff followed up on that work in 1995 and found that the relationship worked for a variety of asphalt binders over a range of penetration values from 10-200 dmm. The regression equation based on his data was:

Testing was conducted by AI and Paragon to determine the complex shear modulus (G*) of a variety of coating asphalt binders. To follow up on the earlier research, testing was conducted using the Dynamic Shear Rheometer (DSR) operating at a loading frequency of 2.5 rad/s. The test temperature was kept the same

as the penetration test (25°C). The relationship, shown in Figure 1, reasonably matched the Gershkoff relationship but with a slightly different regression equation and a lower coefficient of determination (R2 value). Although the reason for the poorer correlation is not completely clear, it seems likely that at least part of the reason could be that the AI-Paragon data represents a smaller subset of the range of the Gershkoff data. Since coating asphalt binders were tested in the study, the penetration range was much smaller (8-21 dmm) compared to the Gershkoff study (10-200 dmm) that used paving grade asphalt binders. 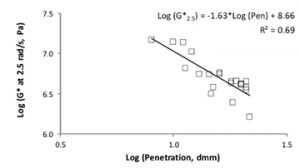 If the AI-Paragon relationship is used, substituting in the minimum and maximum specification values for penetration for a Type IV asphalt from ASTM D312, “Standard Specification for Asphalt Used in Roofing” would yield G*2.5 values of 7.96 MPa (for 12 dmm) and 2.41 MPa (for 25 dmm). Based on this, the following is suggested as an option to replace the penetration test and criteria:

Technologists can determine the value of G*2.5 at 25°C by using the DSR and generally following ASTM D7175, “Standard Test Method for Determining the Complex Shear Modulus (G*) of Bituminous Mixtures Using Dynamic Shear Rheometer.” Testing should be conducted at a frequency of 2.5 rad/s using 8-mm parallel plate geometry and an applied shear strain of 1 percent. Except for the loading frequency, these operating parameters are comparable to the testing conditions used for paving asphalt binders after simulated long-term aging using the Pressure Aging Vessel (PAV).

To confirm this relationship, Paragon conducted testing on a variety of coating asphalt binders and compared the data from rheologic testing and traditional testing. The critical temperature, Tc, was defined as described above from η*. The relationship is shown in Figure 2. 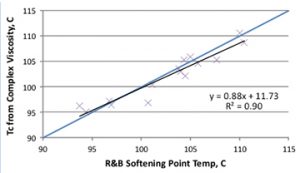 As can be seen in Figure 2, there is a strong relationship between the critical temperature determined from complex viscosity data and the R&B softening point temperature. The data are generally distributed about the line of equality. Considering that the regression curve is close to the line of equality, it doesn’t appear that the regression equation will need to be used. Instead the temperature will simply be determined as follows:

Technologists can determine the value of η* by using the DSR and generally following ASTM D7175, “Standard Test Method for Determining the Complex Shear Modulus (G*) of Bituminous Mixtures Using Dynamic Shear Rheometer.” Testing should be conducted at a frequency of 1 rad/s using 25-mm parallel plate geometry and an applied shear strain of 5 percent. For coating asphalt binders, testing should be started at 90°C and the value of the complex viscosity (η*) determined. Testing is then continued to determine complex viscosity values at 100°C and 110°C. The technologist can then plot complex viscosity, η*, as a function of temperature on a semi-logarithmic graph. The temperature can then be determined, to the nearest 0.1°C, where η1* is equal to 1200 Pa-s. This temperature may be interpolated or extrapolated. An example is shown in Figure 3. 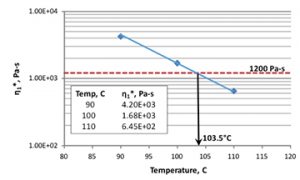