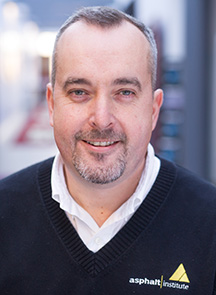 In 2013 I began researching a project for work that seemed pretty straight forward and definitely technical.

The Health, Safety and Environmental (HSE) committee of the Asphalt Institute (AI) tasked our team with developing posters and a wallet card on steps for first-aid treatment when workers experience an asphalt burn. Tracie Schlich and I worked closely with Dr. Earl Arp and the HSE committee and various task group members to design and produce three posters and a handy 2.25″x3.25″ plastic card.

The number of iterations and the passion displayed in these meetings and calls should have been a clue for me that this group meant business. It was in this process that we created the man we called “blue guy.” A local illustrator developed a life-like drawing for us of a man with all the appropriate personal protective equipment (PPE) in order to prevent exposure to hot asphalt.

He looks hot, doesn’t he? Not in that way – but like he would be sweating profusely under all that PPE. I began to think to myself how excessive it seemed to wear all that stuff – even when I knew all the dangers of thermal burns.

After the release of the posters and cards came the real challenge. The committee asked us to produce a safety video about asphalt burns. We began doing our homework.

We met with colleagues at the National Institute for Occupational Safety and Health (NIOSH) in nearby Cincinnati. Security to enter the U.S. Centers for Disease Control (CDC) building was tighter than any airport screening I had encountered. Representatives from their education and information division gave us great advice on how best to proceed.

Next, we developed story boards to present to the HSE committee in San Antonio, Texas in April of 2014. We had gathered all the information from various sources and set out to film a seven to nine minute video.

The support we were shown by Asphalt Institute member companies and their volunteer staff members was nothing short of remarkable. We asked employees to sit in chairs and let us experiment with sometimes ghoulish make up. We soaked many with cold water multiple times in order to get just the right shot.

At each location, I had the opportunity to ask questions about burns and how they might happen. Hearing the workers talk reverently about the dangers and precautions gave me a newfound respect for what they encounter on the job every day.

When I developed the script, I would put in place holders for an interview with a burn victim. This was mostly wishful thinking. For months we did not have anyone to talk with and I was starting to get worried.

Longtime AI member Dan England agreed to talk with us about a harrowing experience from 25 years ago when PPE saved his life. Then fortunately we were connected with three burn victims at our location shoots who were willing to go on camera and talk about their experiences.

I had Googled many a cringe-worthy account online with sometimes gruesome photos of asphalt burns. But I really thought it would help capture our viewers’ attentions if we had a first-person account. I imagined a crew of 10 to 15 employees being corralled into a break room and being forced to watch our final product. I wanted to grab them.

Talking with Dan, Dave, Tim and Jeff was humbling and transformative. Dave was still recovering from his burns when I interviewed him. I had never imagined our process becoming emotional – but it did. 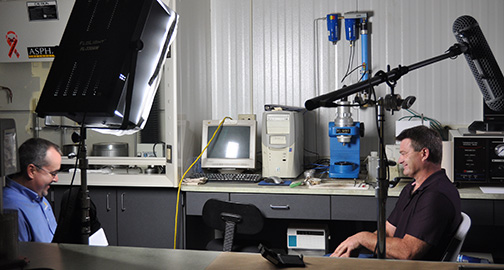 The severity of their burns and their reactions all differed. But each of their stories were relatable and eye opening. They aren’t careless people. They were just unlucky and experienced an accident. By telling their stories, they can hopefully help prevent an accident or even save a life.

We repeat the mantra “keep it cool” often in the 13-minute video. (I failed at keeping it under 10 minutes.) We sincerely hope people will associate healing with running water.

But I honestly think the things that will remain in viewer’s memories are the personal accounts from these undaunted men. I know their words will forever stay with me.

View a clip from the film:

Copies of the video are available at our online store. There is also a bundle buy with the DVD, cards and posters.