In the October 2016 issue of “Asphalt” an article was published that discussed the integration of rheology into roofing applications. The article noted: “There is a logical path to integrating rheology into asphalt coatings, in a similar matter to the way performance-based specifications for paving asphalt have evolved.”

The problem (also noted in that article) is that although asphalt coating properties are critical, “there is limited agreement in the industry to what the rheological requirements would be beyond empirical softening point, penetration and the asphalt viscosity.”

Even though there may be limited agreement on what, specifically, the requirements should be, it is clear that rheological tools can help provide information on the expected behavior of asphalt roofing binders at a wide range of temperatures and loading frequencies.

If your friends jumped off a cliff

I suspect many of you have heard the start of this admonition – usually from a parent – and can finish it without even thinking. The more apt you were to follow the crowd, the more likely it was that you heard this at some point in your life. It could have been “cliff” or “bridge” or “roof” – which would be oddly appropriate for this article – but the sentiment was the same. Why do something just because everyone else is? Do we really need rheological testing of roofing asphalt binders when we’ve used the softening point and penetration tests successfully for so long?

I think the answer to the last question can be answered by understanding that times change and tools/skills change.

For conventional unmodified asphalt binders, the tools we’ve used for many years are still useful to this day. For paving grade asphalt binders, viscosity still matters at high temperatures. Penetration tells you something about intermediate temperature stiffness. What is different since the inception of the Strategic Highway Research Program (SHRP) is that the tools/skills we have now allow us to easily characterize asphalt binders at a wide range of temperatures and loading frequencies. For about the same amount of time required in testing, we can get more complete information.

I had a set of World Book encyclopedias when I was younger. They were my go-to resource for information for papers while I was in elementary and high school (I realize I’m dating myself here). As useful as they were to me then, I’d be willing to bet that my kids have never cracked open a bound encyclopedia; there isn’t that need with our access today to the internet. I still recall something Dr. David Anderson, one of the principal SHRP researchers responsible for the PG Asphalt Binder system, said to me once (paraphrasing here a bit): “The asphalt researchers many years ago weren’t stupid – they were really very smart. They just didn’t have the tools that we have today.”

To better understand the role the asphalt binder plays in the final performance of the roofing product – whether BUR or shingle coating – we need a complete characterization of the product. Rheological tests offer us that opportunity.

In the previous article, it was noted that the Asphalt Institute Roofing Technical Advisory Committee had discussed replacing the penetration test at 25°C with a test conducted on a dynamic shear rheometer (DSR) at the same temperature. A draft test procedure is being developed, but the expected conditions of the procedure are:

Previous work found that a range of penetration values from 12-25 dmm could be approximated by a range of G*2.5 values from 2.50-8.00 MPa. Similarly, the committee had also discussed using the temperature at which η* was equal to 1200 Pa-s, when measured at 1 rad/s using the DSR, as a substitute for the Ring & Ball (R&B) softening point temperature. As with the procedure for determining intermediate temperature stiffness, a draft test procedure is being developed, but the expected conditions of the procedure are:

Although the two DSR procedures described before can be performed independently, they still only constitute single-point measurements. Even more information can be obtained by taking the time to do temperature-frequency sweep testing so that more rheological information can be derived at a wider range of temperatures and loading frequencies. A reasonable range of loading frequencies is from 0.1 to 10 rad/s, spaced logarithmic at ten points per decade to yield a total of 21 loading frequencies per temperature. Test temperatures can cover any desired range subject to the DSR capabilities, but generally you want the spread to be no more than 10-15°C so that you can get sufficient overlap of the isotherms. 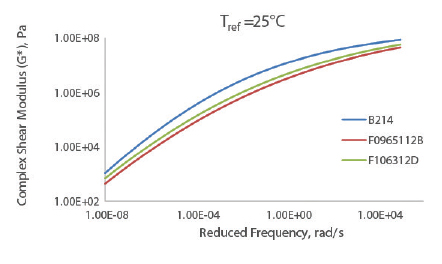 From the general mastercurve data, G* and phase angle (δ) can be derived at a number of temperatures and loading frequencies. For example, Table 1 below shows the values of G* at 25°C and 2.5 rad/s derived from the mastercurves in Figure 1 and compares it with the measured penetration values for the same roofing asphalt binders.

Table 1: Comparison of G* and Penetration for Roofing Asphalt Binders

Table 2 shows the calculated temperature (using mastercurve data) at which the complex viscosity at 1 rad/s (η*1) is equal to 1200 Pascal-seconds.

Although the values are slightly different for Tc than softening point, they are in the right order and of similar magnitude, giving confidence that the rheological parameter and softening point provide similar information.

Would you jump, too?

So all the cool kids are doing rheological testing, talking G* out in the courtyard and δ under the bleachers. Should you join them? Other than the fact that you can get a broad range of information from DSR testing, why bother? I’d ask you to also consider time and precision.

Considering that the asphalt technologist can use DSR tests to get more information in a comparable, or even shorter, time with similar precision, I think I’d have to say “Yes, Mom, I’d jump too.”

Anderson is the Director of Research and Laboratory Services for the Asphalt Institute.