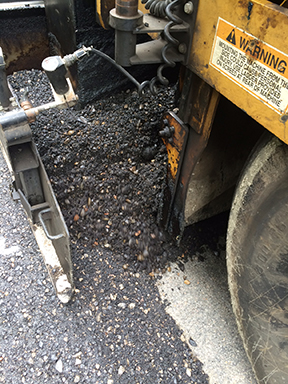 For Cortland County, the Truxton-Tully Road project began in 2011 with the obtainment of proper right of ways, permits and the development of the pavement design. The 5.8-mile section of pavement was on track to be fully reconstructed beginning with full depth base stabilization and covered with 4 inches of hot mix asphalt (HMA).

But then the train came off the tracks. In 2013, the New York State Department of Transportation (NYSDOT) unveiled its new pavement management strategy “Forward Four” – the four guiding principles to ensure that NYSDOT is making good decisions in the efforts to preserve, maintain, operate and enhance the safety and condition of the state’s transportation system. The four principles include:

The primary focus shall be on system preservation and safety. Expected resources will not support a “build new” or “worst first” approach but must have a “preserve what we have” approach. A preservation first strategy focuses on preventive, corrective and demand work with the highest priority to preserve the functionality of the existing highway system.

A system-wide problem requires a system-driven and program-driven, rather than a project-driven, solution. That means, when one looks at an individual project, one must look at it in the context of the larger transportation system: who does this asset serve? Is it on a corridor that is essential to move people or goods? Where does it fit into the regional and state priorities? Inherent in these decisions is the need to identify better ways to manage and operate the transportation system as a whole to most effectively use the capacity of the system we currently have.

Funding for transportation infrastructure and services has been and will continue to be significantly less than the amount required to address all of our roadway’s recognized needs. Insufficient investments have resulted in declining system conditions and a growing backlog of needs in order to bring our system to a state of good repair. Given the significant needs of our transportation system, it is essential that we utilize a strategy to invest in a way that produces the greatest possible return on investment – making good decisions and spending our funds in a manner that not only preserves the most important assets but that best meets the needs of those who rely on the transportation system.

A sustainable approach to programming considers the relative and cumulative value of our assets as they benefit the public, economy and environment. In this way you can enhance your decision-making process in terms of looking broadly at the wider benefits of the work done with each comprehensive program. As part of this strategy, the focus will be on ways to preserve existing transportation systems; incorporate sustainability considerations into decisions and actions; and support opportunities for innovation, economic growth and development. This must be done in a fiscally responsible manner by considering life cycle cost as well as fiscal cycles.

So how does this new decision-making process affect Cortland County and the Truxton-Tully Road project?

Original funding for the project was $3.4M – 80 percent of the funds were federal, 15 percent were state, with the county funding the remaining 5 percent. The first guiding principle, “preservation first”, requires that the local agencies must spend 80 percent of their total funding on preservation projects, limiting the funds available for new construction, rehabilitation and reconstruction type projects. With this new requirement and based on Cortland County’s program and level of funding, the available funding for the Truxton-Tully Road project was reduced to $2.0M – a shortfall of $1.4M or a reduction of 41 percent.

Faced with this dilemma, what does the county do? They don’t have the resources to make up the difference – do they reduce the scope of work? Do they shorten the length of the project by 41 percent? Neither of these were good solutions for the 300+ vehicles per day that use this road to get to and from work. The county had to get creative to find a way to stretch their dollars.

Moving forward, the county engineers approached their legislature and were able to acquire funding for the base stabilization portion of the work. While this helped significantly in reducing the overall shortfall, there still remained a deficit in funding for the structural asphalt overlays.

Unable to reduce the overall pavement thickness due to structural and safety concerns, the county began to think outside the box. Relying on their experience with cold mix paving on locally funded projects, the county reached out to NYSDOT and to Suit-Kote – a local asphalt emulsion company – for help in the development and approval of an acceptable cold mix asphalt specification that could be used on this project.

This new specification would need to be approved by the state DOT in order to allow federal funding to be used on the project.

“By specifying cold mix asphalt on this project, we would recognize some savings that would cut into the funding deficit while maintaining the field performance we desire”, says Philip T. Krey, P.E., Cortland County Superintendent of Highways. “The collaboration between our office, NYSDOT and Suit-Kote was awesome with the entire process – spec development through funding approval – taking less than six months.”

The project was subsequently bid and came in according to budget. This is the first time that federal and state monies were spent on this type of cold mix paving – giving local agencies a new tool for reconstruction and rehabilitation projects.

Paving was completed in August 2015. Two cold mix asphalt lifts were placed over the stabilized base course – a Type 2 base course placed at 3 inches and a Type 1 intermediate course placed at 2 inches. Both mixes were produced using an HFMS-2gh emulsion. Weeks later, the county applied a chip seal as the wearing course.

Faced with a funding deficit on the Truxton-Tully Road project, Cortland County Department of Highways made some necessary design changes to reduce the shortfall. Recognizing the cost effectiveness of cold mix asphalt, they worked with their partners to develop a necessary state specification for cold mix that would allow federal funding to be used. Working together, this became a reality within six short months.

Greg Harder is an Asphalt Institute Regional Engineer based in New York.