The central role of temperature in asphalt paving 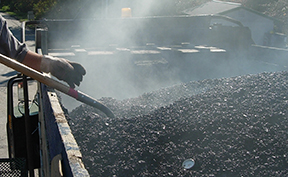 When it comes to building an asphalt pavement, creating and then maintaining the product within the right temperature range is absolutely vital.

The reason is nicely described by what some call the “goldilocks zone.” To retain its compaction properties between the asphalt plant and being laid on the road, the asphalt mix cannot be too hot or too cold. Its temperature has to be just right.

“Temperature is the key,” said Jim Scherocman, a Cincinnati-based asphalt consultant with 54 years experience in the business. “It controls all aspects of paving: How long it will remain workable on the job site, and how much time you have to finish laying it down and compacting it?” He added that the thickness of each lift also matters. The thicker the layer, the longer it will retain its heat and remain compactable.

Unfortunately, a number of factors affect the final laydown temperature of asphalt, and thus how well it lasts for years to come. Here is a look at them, plus other temperature considerations that “keep the heat” on asphalt paving contractors.

The hottest time in any asphalt pavement’s life is at the processing plant when it is mixed – no matter whether the product is unmodified hot mix asphalt (HMA), polymer modified HMA or cooler warm mix asphalt (WMA).

There are different reasons and situations for using each of these asphalt products, which are outside the scope of this article. What is within its scope is this common fact: All of these mixes should ideally be produced hot enough at the plant to provide the right temperature range during paving. “For regular HMA, this is 275°F to 300°F,” said Scherocman. “For polymer modified HMA, the range is 285°F to 320°F.”

Here is where it gets tricky: Although there are ways to reduce heat loss during transport by truck, such as insulated truck beds and top-covering tarps, all forms of asphalt pavement lose precious heat during the trip from the plant to the paver; anywhere from 5°F to 25°F, or more. Reducing the time between the plant and the paving site, and working on warm days can help, but the fact is that heat loss is an unavoidable problem.

Can boosting the temperature at the asphalt plant solve this problem? “If you make the asphalt mix too hot at the plant, you can damage the liquid asphalt binder by changing its chemical and physical properties,” said Mike Huner, an asphalt consultant based in Nashville, and owner of Huner Consulting. “You would end up getting hotter asphalt mix to the work site, but its long-term performance life would be compromised. This would result in a pavement layer that won’t last as long as it was meant to.”

At the other end of the “goldilocks zone” is asphalt that is too cold. The reason is that, as the temperature drops, the asphalt mix stiffens – making it harder to compact.

Compaction is key to creating long-lasting roadways. Proper compaction improves roadway performance in several ways. It provides shear strength to resist rutting. It optimizes air voids to maximize durability, minimize fatigue and minimize oxidation that can prematurely age the pavement. Proper compaction also helps waterproof the pavement surface, minimizing permeability that can contribute to stripping of the binder from the aggregate particles in the asphalt mixture. “The goal is to achieve an air void content of six percent or less to achieve optimal performance,” Scherocman said.

“If the mix is too cool coming off the dump truck, it will be too stiff and too difficult to compact,” said Danny Gierhart, an Asphalt Institute Senior Regional Engineer based in Tuttle, Oklahoma. “If the mix is allowed to cool to below 180°F to 190°F before the proper density is reached, the mix will be so stiff that additional compaction efforts can actually crush the aggregate in the mix.”

The Asphalt Institute has weighed in on this topic. “Mixes must be placed and compacted before they cool to 185°F, so the minimum temperature will depend on the temperature of the layer upon which it is being placed as well as ambient conditions,” according to the AI website. “Generally, agency specifications will spell out a minimum acceptable temperature for the mix behind the screed, usually 250°F.”

When you are working outdoors with a hot material where heat loss affects its workability, it makes sense to pave (if you have a choice) on days that are hot rather than cold. The reason comes down to thermodynamics: If you put two distinct bodies of different temperatures in contact with each other, they will eventually come to a common shared temperature as the heat from the hotter surface transfers to the relative ‘cold’ of the other.

What this means is that hot HMA will lose heat quicker on a cold day than a hot day. It will lose heat even quicker if there is a cold wind racing across it.

“This said, ambient temperature is not necessarily a big deal,” said Scherocman. “For instance, on spring days it is not nearly as much of an issue as the temperature of the base asphalt.”

The temperature of the existing pavement/road bed, compared to that of the asphalt being laid down, also plays a role in affecting how long the asphalt remains workable.

“The existing pavement temperature needs to be warm enough that it doesn’t cool the fresh asphalt lift too quickly before it can be properly compacted,” said Gierhart. “The minimum allowable surface temperature has to be warmer as the lift thickness decreases. Typical minimums are 40°F for lifts greater than 3 inches and 50°F for mixes thinner than 2 inches.”

“Remember that in the spring the base is cold from the winter,” added Scherocman. “So even on a warm spring day, you can have issues with the existing asphalt being too cold to work with.”

“The degree of compaction of an asphalt concrete mixture is the single most important factor that affects the ultimate performance of the pavement under traffic,” said Scherocman. “This, in turn, is affected by the temperature of the asphalt as it is being laid and compacted.”

“Try to compact the mixture when the asphalt is too cold, and you can end up with what we call a pie crust effect,” warned Huner. “The resulting pavement layer can be cool and brittle on top, but soft and uncompacted in the middle. It will be prone to hairline or check cracking on the surface during the compaction process.”

Ideally, all forms of asphalt should be laid and then immediately compacted while within their respective goldilocks zones. This is why it is imperative for paving companies to have a “just in time” asphalt mixing/delivery process, or as close to one as they can attain given the realities of real-life paving.