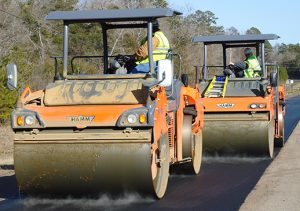 Proper compaction of an asphalt pavement is essential for long-term pavement performance. Studies show that a one percent reduction in in-place air voids can extend the asphalt pavement service life by at least 10 percent.

In order to bring this message to paving professionals, Asphalt Institute (AI) regional engineers created a workshop in 2016 entitled “Enhanced Durability through Increased In-Place Pavement Density” for state departments of transportations (DOTs) in cooperation with the Federal Highway Administration (FHWA).

The one-day workshop offers owner agencies and paving contractors the opportunity to learn about the dramatic impact on pavement durability realized from relatively small increases in in-place densities. The workshop was provided to ten state agencies that requested to be part of the FHWA Asphalt Pavement Technology Program strategic initiative on extending pavement service life through enhanced field compaction.

The idea for this workshop came from FHWA, state highway agency and industry professionals across the country who agree that asphalt pavement durability could be improved. Research has shown that durability is a function of pavement density. Therefore, a major positive impact on pavement performance can be realized when density is increased.

There is also general agreement that the adoption of Superpave technologies did a good job of providing more rut resistant pavements, but those changes typically led to mixes with reduced asphalt binder contents. These mixes sometimes were lacking in durability related characteristics, such as crack resistance and impermeability.

Furthermore, the current trend of using higher percentages of recycled materials in asphalt mixtures is often mentioned as a possible contributor to poor durability. Discussions prior to this initiative about the solutions to the durability issues rarely included improving in-place pavement density.

John Bukowski, Materials and Quality Assurance Team Leader, FHWA Office of Infrastructure, describes the reasoning behind the FHWA’s renewed interest in increasing in-place roadway density: “There have been significant advancements in pavement design technology and construction techniques that enable better in-place compaction. While, many of these advancements are already in use, standards for in-place density have, in too many instances, remain unchanged. The partnership with these workshops and demonstration projects reflects the enthusiastic willingness by state agencies and industry to make needed changes.”

During the workshop, instructors made the case that it is possible to significantly improve the compaction process by simply using known construction and compaction best practices and taking advantage of new compaction related technology. A well-planned and executed compaction process will naturally result in higher and more consistent in-place density.

Engineers then linked increased density to improved durability by showing numerous lab and field studies that show a one percent increase in density could improve durability by at least 10 percent.

For example, an asphalt overlay constructed to 93 percent density might be expected to last 20 years while the exact same asphalt overlay constructed to 92 percent density would only be expected to last 18 years. This additional two years of service life translates into significant savings over the long run to a highway agency. In fact, the user agency will see a LCCA (life cycle cost assessment) net present value cost savings of $88,000 on a $1,000,000 paving project (or 8.8 percent) by increasing field density by one percent (all else equal).

Also covered are the results of a recent Asphalt Institute study that analyzed asphalt compaction specifications used for high traffic level projects in all 50 states. A breakdown of practices by states on such things as how density is measured (cores, gauges), statistical approach (percent within limits, simple averaging), incentives/ disincentives (used or not), highest level of incentive and more are provided. Attendees often commented that they particularly like seeing what other states are doing with their specifications and practices. As an example, the graphs on page 11 show the lowest in-place density level where state DOT specs allow 100 percent pay for high traffic projects. Also, roughly half the states utilize PWL (percent within limits) while most of the others generally use simple averaging.

“The workshop has a ‘back-to-the-basics’ focus regarding compaction and the importance of all the details in the compaction process from mix design to field production to testing to the finish roller,” said Tim Aschenbrener, who oversees the workshop and demo projects for FHWA.

“There are even lessons on many of the newer innovations that assist with compaction. The ratings and comments really showed there was a need to comprehensively cover the importance of all these details with formal training, even if some of the information was just a reinforcement of things learned in the past.”

Despite the significant impact on pavement service life that increased density can provide, the actual cost to the contractor of using best practices during the compaction operation is relatively small compared with overall costs. When new and innovative technology such as warm mix asphalt, Pave IR or intelligent compaction are used, there may be some additional cost to the construction of an asphalt pavement. However, the benefits of using these technologies are typically worth the additional cost.

The increased durability workshop was the fourth workshop developed and conducted in partnership with the FHWA and Asphalt Institute. Other previous collaborative workshops focused on best practices for longitudinal joint, intelligent compaction and tack coat preceded this effort. Visit asphaltinstitute.org for resources such as free access to recordings, presentation handouts and links to key resources related to these topics.

The workshops are only part of the overall FHWA plan to coordinate efforts by a number of different industry sources. The FHWA wanted to highlight advancements in compaction technology, state agency density specifications and research related to how in-place density of asphalt pavements impacts pavement durability and ultimately service life.

In early 2016, the National Center for Asphalt Technology (NCAT) released NCAT Report No. 16-02: “Enhanced Compaction to Improve Durability and Extend Pavement Service Life: A Literature Review.” This report summarizes the findings in this way: “Studies clearly indicate the effect of low in-place air voids on the fatigue and rutting performance of asphalt pavements. A one percent decrease in air voids was estimated to improve the fatigue performance of asphalt pavements between 8.2 and 43.8 percent and the rutting resistance by 7.3 to 66.3 percent.”

Another task in FHWA’s density initiative is to fund and oversee demonstration projects in each of the 10 states that received the workshop during the 2016 construction season where a portion of the paving is set aside to improve in-place density. FHWA asked that states host the workshop prior to the project. The states will work to develop and execute a plan to determine if density can be improved by simply applying more roller passes on designated sections of new asphalt pavement compared to a control section where typical compaction operations are used. Some of the ten states have included other approaches in additional test sections to improve density. More of the increased density workshops are planned for 2017.

AI is also developing a new two-day course on the construction of durable asphalt pavements where thickness and mix design, performance testing, construction and acceptance best practices will be emphasized.

The increased density topic along with the advancement of performance-based mixture testing and design will likely continue to dominate industry initiatives for the foreseeable future. AI feels strongly that the fundamentals emphasized during this workshop are important in moving the industry towards obtaining the maximum life out of our pavements.

Horan is an Asphalt Institute Senior Regional Engineer based in Virginia.