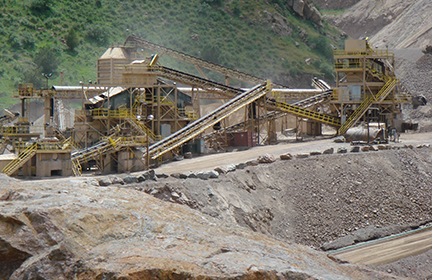 Billions of dollars worth of construction aggregates were produced in the U.S. in 2014, according to the U.S. Geological Survey’s (USGS) Mineral Commodity Summaries 2015 report.

It was 19.8 billion dollars to be exact. That is seven percent more than 2013. The growth reaffirms the ongoing recovery of the U.S. construction market in all sectors – including asphalt road building.

“With this significantly stronger construction activity across the country in 2014, recovery in the private sector and residential construction experiencing a level of growth not seen since late 2005, consumption of construction aggregates is likely to continue to increase,” said USGS Crushed Stone Commodity Specialist Jason Willett on rockproducts.com.

“It is expected that the increased consumption in 2014 from that in 2013 will reach or exceed the historical annual average of the past 50 years, which was a two to four percent increase per year,” Willett added.

Aggregate production matters to the asphalt industry, because asphalt and aggregates (crushed rock, gravel and sand) are combined to pave the nation’s roadways. If aggregates are in short supply, the shortage can delay road construction; depressing asphalt sales and asphalt paving company revenues.

At first glance, it doesn’t seem possible that aggregates could ever be in short supply. After all, aggregates are derived from the very rock that makes up the United States – and the planet.

In theory, this is true. However, the reality is more complicated. Thanks to the various geological processes that are constantly occurring on this planet, some areas have easy access to the rock they need to make aggregates. Others do not.

Few people know this better than research geologist Bill Langer. He runs his own geological consulting company in Phoenix, Arizona. Formerly, Langer was the USGS’ Aggregate Geologist from 1976 until his retirement in 2012.

During his 41 years at the USGS, he traveled the country visiting and documenting its various aggregate resources. The fruits of his labors were compiled into an authoritative USGS resources map of the continental United States. Langer’s map shows clearly where aggregates such as granite, limestone, trap rock (non-granite igneous rock) and sand and gravel deposits are accessible throughout the U.S. and where they are lacking.

“In general, aggregate deposits are found in the western and eastern United States,” said Langer. “The geology in areas such as the Adirondacks, Appalachians, Rocky Mountains and West Coast mountain ranges put usable resources right at or near the earth’s surface. So did the river deposition areas around the Great Lakes and Upper Mississippi River.”

Thanks to geologic processes, some regions just don’t have ready access to aggregates simply because the rock is of very poor quality or is covered by thick sediments, he noted. “For example, the Great Plains, which extend from eastern Montana and western North Dakota southward to Oklahoma and Texas, generally are underlain with poor quality shale, sandstone and chalky limestone.

“The poor quality rocks in these regions are the depositional legacy of the vanished Western Interior Seaway,” said Langer. “It ran from the Arctic south to the Gulf of Mexico during the mid-to-late Cretaceous and very early Palaeogene periods (145 to 60 million years ago). Later the rocks were covered by sediments being shed from the Rocky Mountains and those in the north were also covered in deep fill left by retreating glaciers during the last Ice Age.”

The result is a dearth of natural aggregates in specific areas, according to a 2011 Federal Highway Administration article (FHWA) article, “Wherefore Art Thou Aggregate Resources for Highways,” by Richard C. Meininger and Steven J. Stokowski.

“For example, natural aggregate is in short supply in the Coastal Plain and Mississippi embayment, Colorado Plateau and Wyoming Basin, glaciated Midwest, High Plains and the nonglaciated Northern Plains,” said the FWHA article. “Furthermore, many sources of aggregate in other areas, such as parts of the Pacific Northwest, do not meet physical and durability requirements, or they contain contaminants or deleterious materials that limit use.”

Transportation to the rescue

In such areas, the answer to missing aggregates is to transport the material in from aggregate-blessed regions. Trucks, rail cars, barges and ships are used to move this extremely heavy, low value (by weight) commodity.

Sometimes the distances covered appear extreme, such as the waterborne shipping of rock and aggregates over two thousand miles from accessible rock-rich Nova Scotia to swampy Florida. However, these are the most direct ways to get the materials to where they are required. Meanwhile, in areas such as Nebraska, trucks that brought in aggregates are loaded with corn for the trip home, in order to reduce costs.

There are a number of factors that can and do lead to aggregate shortages in aggregate-poor regions of the United States.

When a major project occurs that requires lots of aggregate and the builders are willing to outbid other buyers, the supply can run temporarily short. “When the new Denver International Airport was built in the 1990s, local quarries had a very hard time keeping up with the demand for aggregates,” said Bill Langer. “Much of it had to be brought in from outside. A major producer decided to invest in the market by creating an aggregate distribution yard in the Denver area. They shipped crushed stone over a hundred miles by rail to the yard.”

Langer noted that not all quarries make such investments during periods of sudden demand, because they fear the demand will drop off again; leaving these operators with unused capacity. This fact makes him muse about what might happen if the U.S. government ever decided to spend billions refurbishing the country’s deteriorating infrastructure. “If this occurred, the supply of available aggregates in some parts of the country wouldn’t be able to keep up,” said Langer.

The second source of shortages is the NIMBY (Not In My Back Yard) factor. Although homeowners want the benefits of new and refurbished roads, they object loudly when someone proposes building a quarry in their neighborhood.

“People in these instances complain, ‘why don’t you build the quarry somewhere else where there’s nothing but empty land’,” said Langer. “The problem is that if the rock were accessible there, the quarry would be built there. But it isn’t – the rock is accessible at the location they’re objecting to.”

The third source of aggregate shortages is caused by urbanization. Humans have built and settled upon land that has valuable rock resources under it. “This is the case in Los Angeles,” Langer said. “The necessary resources are under the city, but you can’t get at them.”

In the long term, the aggregate shortage instances noted above are not dire. Ramped up production in aggregate-rich regions can compensate for such shortages over time and keep America building new roads and fixing old ones.

This said, Bill Langer’s points underlie a serious point that asphalt manufacturers need to be aware of: A plentiful supply of aggregates is not a given.

Should the asphalt industry not keep a close eye on the nation’s aggregate supply, it could find its asphalt sales stymied by a shortage of necessary raw materials if and when the demand for road building goes up substantially.