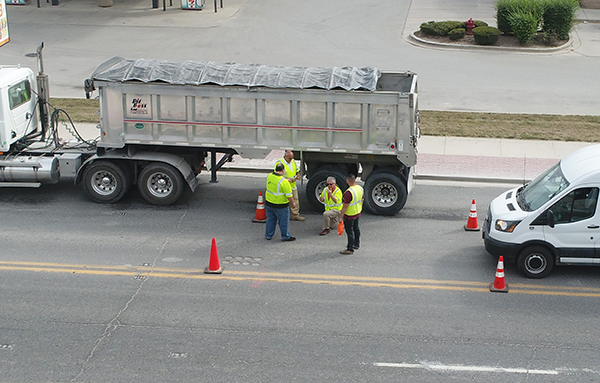 Pavement experts have always known that as the stress applied to a pavement goes up, the attention to detail during the design and construction must also go up to build a long-lasting pavement. Heavy, slow-moving vehicles that are stopping, standing, turning and accelerating apply the highest stress levels possible to a pavement, and all these compounding factors can be found at intersections.

Success through the ages

In the mid-90s the Asphalt Institute recognized the need for a process to deal with intersections and other high-stress applications and formalized a basic four-point strategy.

One of the first intersections to be rebuilt using this four-step process was the intersection of Williams and Margaret Streets in downtown Thornton, Illinois, in 1998. A sign near the intersection proclaims “Thornton Quarry, Largest Limestone Quarry in the World.”

Thornton quarry produces up to 50,000 tons of stone each day and most of this aggregate is shipped by truck and passes through the intersection of Williams and Margaret streets. The quarry provides most of the mineral aggregates used throughout south Chicago and northwest Indiana, and even gets trucked as far away as southwest Michigan. Because of the quarry’s excellent quality, paving contractors are able to utilize this aggregate source to ensure consistent asphalt mix production.

During construction season, over 1,200 heavily loaded trucks per day enter the intersection, most of them stopping at the traffic light or making turns in the narrow 11-foot-wide lanes, which heavily channelizes the load applications. On several previous occasions, the intersection had been paved, repaved and even reworked to the sub-base. Until the intersection’s rehabilitation in 1998, however, regardless of the effort or dollars expended, the performance of the pavement surface continually fell short of Illinois Department of Transportation (IDOT) expectations. Typically, it required some sort of maintenance or rehabilitation even before a year had passed.

The team met for numerous technical discussions and analytical sessions to develop the pavement design. The surface mix and the intermediate layers would have to handle the torture of the extraordinarily high traffic loads in order to meet the mix team’s high expectations. As a result of the analysis, the experts determined that a previously placed asphalt overlay had not failed, but instead found the older mix below it showed signs of serious deformation to a depth of approximately six inches. IDOT decided to mill the existing intersection pavement full-depth to ensure that the new mix would be placed on a solid foundation.

IDOT specified that a Stone Matrix Asphalt (SMA) mixture using the Quarry’s own dolomitic limestone as an intermediate course be placed directly on the milled surface and then topped with a 2-inch SMA surface mix. The aggregate for the SMA surface was specified to be steel slag, a byproduct of the steel manufacturing in the region. Steel slag can be considered a “green” sustainable material that can be reclaimed and reused multiple times, helping to preserve natural resources. Based on numerous environmental tests, studies, reviews by governmental agencies and the iron and steel industry, iron and steel slag has proven to be a safe and valuable resource. Since slag is a recycled material that comes from the manufacturing of iron and steel; both slag products score high on first use per the Greenroads™ rating system.

Including the contractor’s personnel on the evaluation team ensured the contractor’s buy-in on the four-part strategy and what needed to be accomplished during construction. Finally, with input from everyone on the team, it was determined it was indeed possible to remove the existing pavement by milling and then construct the intermediate layer, followed by the properly applied SMA surface mixture all within the time constraints imposed by the quarry owner.

Fast forward back to the future

While it feels good to develop and deliver a project that is expected to perform over a longer period of time, how do you know if you have succeeded? You reassemble the same team 20 years later to perform the forensics to understand what performed well over the intervening years. The Illinois Department of Transportation (IDOT) did just that bringing back the original contractor, Gallagher, and consultant test company, Chicago Testing Laboratory (CTL). IDOT and CTL performed forensics on recovered asphalt for Performance Grading (PG) and penetration testing, mixability and flow testing, Hamburg Wheel Testing, I-FIT, in-place density, asphalt content and gradation. Edw. C. Levy Co. performed a steel slag pick via magnetic separation.

The primary findings were that the installation of the SMA mixture 20-years ago: 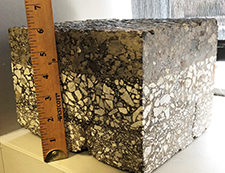 This cross-section photo of the pavement shows that the reflective cracks from the old joints in the original PCC pavement did not migrate through the two new layers of SMA, even after twenty years. Giving special attention to these areas at Williams and Margaret ensured that the highly-stressed areas of the pavement delivered the same outstanding performance as mainline asphalt. During the Illinois Asphalt Pavement Association’s Annual Meeting, IDOT District 1 Materials Engineer George Houston stated that the intersection has appeared to tame both rutting and cracking challenges.

Based on follow-up interviews with the individual forensic team members, a great deal of credit for the long-term performance in this high-stress environment can be attributed to:

After 20 years and nearly 20 million equivalent single axle loads (ESALs), IDOT evaluated the intersection last year, and elected to perform what now has become a routine all over the Chicagoland area, a resurfacing with SMA.

Wayne Jones is a Senior Regional Engineer for the Asphalt Institute in Ohio.
Timothy Murphy is an asphalt consultant based in Illinois.