The nation’s most critical transportation link continues to save lives with its enhanced safety features and is largely well-preserved, but an aging interstate system will increasingly require more long-term, costly repairs, according to a new report released by TRIP, a Washington, D.C. based national transportation organization.

The TRIP report, “The Interstate Highway System Turns 60: Challenges to Its Ability to Continue to Save Lives, Time and Money” finds that while the interstate highway system represents only 2.5 percent of lane miles in the U.S., it carries 25 percent of the nation’s vehicle travel.

The system is increasingly congested, with truck travel growing at a rate twice that of overall Interstate travel. And, while the nation’s interstates tend to be in better condition than other roads and bridges, the aging system lacks the required funding for needed improvements and repairs.

The chart below details the top 10 states whose interstate systems have the highest levels of congestion annually. Data for all 50 states can be found in the report’s appendix. 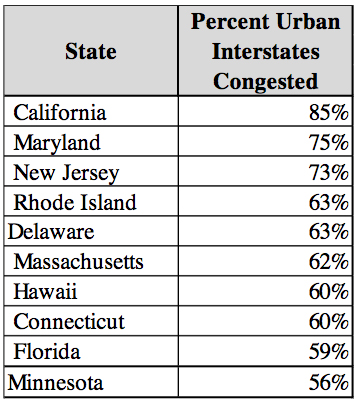