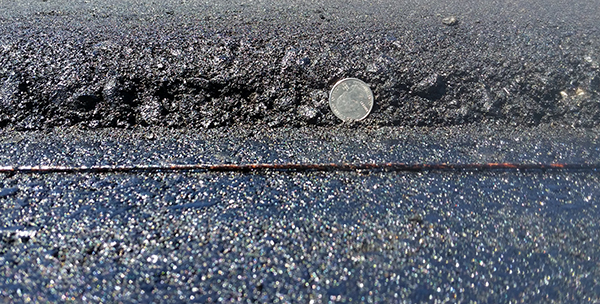 Thin lift asphalt overlays come in different types and can meet many different user needs. They can be very useful in correcting surface deficiencies. They can restore skid resistance to a pavement whose surface has begun to polish. They can be effective in sealing the existing pavement from external moisture. They also tend to have a tighter finish due to the smaller aggregate particles, resulting in a more aesthetically pleasing appearance. They can be successfully used on various types of roadways, from low-volume city streets to high-volume interstates.

Some types of thin lift overlay materials (open-graded mixtures) are specifically designed to allow rainwater to pass through the overlay to the surface of the existing pavement below. The pavement’s cross slope then moves the water through the open-graded surface mix to the pavement edges. This design holds several benefits for the traveling public, such as reducing wet weather spray, reducing nighttime glare and reducing the potential for hydroplaning.

But how thin does an asphalt overlay have to be to qualify as a “thin lift overlay?” It depends on who you ask. NCHRP Synthesis 484 documents the responses to that question with responses from 46 states and 8 private contractors.

Regarding pavement smoothness, it is important to understand that a single thin lift overlay may not be enough to return a rough roadway to its proper smoothness. A single lift of asphalt will increase the existing pavement smoothness by 50 percent, according to Roadtec’s Technical Paper T-123. While that is a great improvement, the application of a smoothness specification to a single thin lift asphalt overlay may not be advisable.

The quality of the existing pavement has a major influence on the subsequent longevity of the thin lift asphalt overlay. Thin overlays placed on existing pavements with too much structural distress will not last long and will skew any reported average service life toward the low side. The overarching concept in project selection for thin asphalt overlays is that the surface to be overlaid must be structurally sound.

The existing pavement should be carefully evaluated, preferably by some documented methodology. The pavement’s areas of cracking, distortion, disintegration and skid hazards should be recorded. Roadway cores are helpful to determine whether cracks are top-down or bottom-up, and can also signal whether any rutting comes from the mix itself or is a function of subgrade consolidation. If the existing pavement is not 100 percent structurally sound, it can still be a candidate for a thin lift asphalt overlay if it can be brought to a structurally sound condition by localized repairs. The guide in the figure below provides a reference for selecting candidate projects for thin lift overlays. 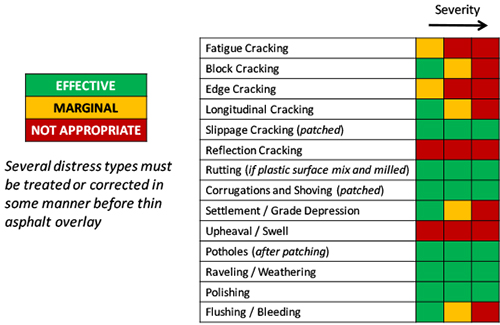 Mix design for dense-graded asphalt mixtures (Superpave, Marshall, etc.) intended for use in thin lifts is very similar to practices employed for standard dense-graded asphalt mixtures. The main difference is the nominal maximum aggregate size (NMAS) selected. For proper workmanship and compaction, the NMAS of mixes intended for thin lifts should be no larger than about one-third the anticipated compacted lift thickness. For thin lifts, an NMAS of 1/2” (12.5 mm), 3/8” (9.5 mm), or No. 4 (4.75 mm) is typically used.

Since thin lift asphalt overlay mixes are used for the wearing course of a project, they should all include some percentage of polish-resistant aggregate, typically granites, sandstones, quartzites, rhyolites, etc. Binders can be the same as would be chosen for other mixes in the same climate and expected traffic. Some agencies require the use of polymerized binders in certain thin lift mixtures, especially open-graded mixtures. A reasonable amount of Reclaimed Asphalt Pavement (RAP) could be used in dense-graded asphalt mixtures intended for thin lifts, but it may have to be the fine fraction of fractionated RAP.

Fine aggregate stockpiles, which make up all or the majority of aggregate used in thin lift mixes, have inherently higher moisture contents (typically 3-7%) than coarse aggregate stockpiles (typically 0.5- 2%). Consequently, combined aggregates for thin lifts have more moisture relative to thicker lifts that need to be driven out during production to avoid stripping issues. This means that production rates may be slower for mixes intended for thin lifts to allow the aggregates to be properly dried.

The problem of higher inherent moisture in fine aggregates may be somewhat mitigated by paving sloped stockpile areas to allow moisture to better escape through gravity flow. Some contractors address the problem by providing covered stockpile areas to reduce rainfall moisture. Although these practices cost money, they may pay off in the long run. A reasonable rule of thumb is that each one percent reduction in aggregate moisture content results in a 10 percent decrease in burner fuel used.

Because thin lifts lose heat faster than thicker lifts after placement and before compaction, there may be some pressure to increase the mix temperature at the plant. Increasing the temperature too much will volatilize the fine fractions of the binder, prematurely aging the mix. Follow maximum temperature guidelines, typically 325°F for unmodified binders and 340°F to 350°F for polymer modified binders. Consult your asphalt binder supplier for their recommendations.

A final consideration for production of mixes intended for thin lifts is the percentage of fine aggregate specified in the mix design. No. 4 (4.75 mm) NMAS mixtures especially may have high percentages of a single fine aggregate type such as screenings. To better control the mixture by minimizing gradation variations in a single cold feed bin, try splitting the aggregate into two or more bins. For example, rather than trying to feed 60 percent screenings from one bin, try using two bins at 30 percent each.

As mentioned earlier, localized areas of distress can be patched or small sections removed and replaced. The patched areas must be of sufficient quality to maintain the structural integrity of the pavement throughout its planned lifetime. Best practices dictate that all patches should be cut to near vertical faces in straight lines, at least one foot back into the part of the pavement that is still structurally sound. The quality of the existing pavement has a major influence on the subsequent longevity of the thin lift asphalt overlay.

Pavements with surface cracking and/or rutting due to an unstable surface mixture should probably be milled. Plan to mill at least 1/2” below the deepest area of distress, avoiding close contact with the lift interfaces. This will remove all of the existing distresses and avoid scabbed areas.

Benefits of milling include:

A leveling course may be desirable in some situations, rather than milling. In that case, make sure to use a No. 4 (4.75mm) NMAS mix or sand mix to avoid dragging large aggregates with the paver screed.

Several construction practices may need to be modified when placing thin lift asphalt overlays. Most agencies specify minimum pavement surface and/or ambient temperatures for placing asphalt. Because heat dissipates faster from thin lifts than thicker lifts, the minimum pavement and/or ambient temperatures required for thin lifts may need to be increased. To demonstrate lift thickness’ effect on compaction, the program PaveCool was used. For a given set of mixture and environmental conditions, the program calculated that 44 minutes were available for the contractor to achieve compaction on a three-inch lift of asphalt. When the lift thickness was dropped to one inch and all other conditions were maintained, the allowable compaction time dropped to only seven minutes.

It is important for the paving superintendent to monitor paving speed when paving thin lifts because it affects the subsequent roller speeds required, and consequently the quality of the compactive effort. When paving thin lifts, each ton of asphalt typically goes two to three times farther than when placing lifts of conventional thickness. Paver operators can unintentionally travel the road very quickly if they’re not paying attention to paver speed. The roller operators are then faced with the dilemma of 1) maintaining the slow, steady speed they need for optimum compaction, or 2) increasing their speed to keep up with the paver. A peculiar characteristic of asphalt binders is that the time of loading affects how it moves under a load, i.e. one roller pass at 6 mph is significantly less effective than one roller pass at 2 mph. As mentioned previously, heat dissipates rapidly from thin lifts of asphalt. If the paver leaves the rollers behind, the mix in between the paver and the rollers cools down quickly, again hindering the roller operator’s ability to obtain adequate compaction.

The type of paving equipment may need to be different when placing thin asphalt overlays. Some agencies require the use of a Material Transfer Vehicle (MTV) when placing mixtures used for thin overlays, such as OGFCs or thin SMAs. The MTV helps to maintain uniform paver speed by reducing stopping and starting and prevents thermal and physical segregation of the mix.

Some mixtures predominantly used for thin lifts, such as UTBWC, are typically placed with a spray paver. This specialized paver also includes an onboard tank filled with tack coat. The gap-graded structure of UTBWC allows for higher application rates of tack, which is applied just in front of the mix. This setup keeps public and/or construction vehicles from driving through the tack and tracking it away from the pavement surface. It also neutralizes the possibility of dust and debris blowing onto the surface of the tack, decreasing its bonding ability before the mixture is placed.

Compaction strategies are also affected when dealing with thin lift asphalt overlays. Because the lifts are thin, vibratory compaction is rarely used. The vibratory action, in this case, can crush aggregates, reducing the overall quality of the pavement. Static rollers are usually employed instead. Because roadway cores are difficult to obtain and test for thin asphalt lifts, compaction quality is often determined by the uniformity of the roller pattern, using appropriately-sized rollers.

For open-graded mixtures, the whole point of the mix type is to allow water to drain through the mixture. Therefore, overcompaction is counterproductive. For these mixtures, a static roller is used with just enough passes to properly seat the new overlay onto the existing pavement.

Thin lift asphalt overlays can be used to address functional issues, safety issues as well as maintain roadways under all traffic conditions as a pavement preservation technique. Project selection is a key issue for thin asphalt overlays. Thin overlays of structurally sound pavements can last 10 years or more.

Gierhart is an Asphalt Institute Senior Regional Engineer based in Oklahoma.