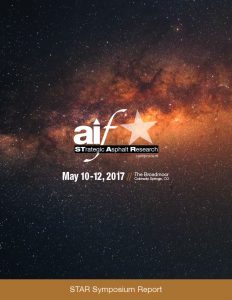 Bringing 118 asphalt industry professionals together in Colorado in May was a concept that yielded many meaningful conversations, idea exchanges and opportunities for future research.

“This is the Google of asphalt assembled in this room,” said Asphalt Institute Foundation (AIF) Research Committee Chairman Greg Malarkey as he addressed the group.

“The vision from the onset for this group was to create the catalyst for leapfrog thinking for the discussions which would lead to breakthrough ideas and research for an exciting tomorrow in our industry,” said Asphalt Institute President Pete Grass.

The keynote speaker for STAR was futurist Michael Rogers. A former “futurist-in-residence” for the “New York Times,” Rogers challenged the group to think beyond tomorrow or the next quarter.

His talk revolved around three top considerations for the future.

1. The virtualization of the world
2. Sustainability, resilience and climate change
3. Demographics; what our customers and employees will be like

Rogers asked participants to think more about artificial intelligence, autonomous vehicles, extreme weather phenomenon, ambient telepresence and robotics. It’s not hard to see how many of these topics will directly affect the asphalt industry.

Performance prompts included durability, weather resistance, increased traffic and prediction tools for long-life of the products. Discussions of performance in the symposium included innovation and how the industry can innovate faster, how asphalt can be moved greater distances, reducing aging and the roof of the future.

Sustainability talks centered around the re-use of asphalt, the economics of environmentally-friendly products and the future of biological products in asphalt. Symposium participants considered the chemistry of recycling agents, additional applications for recycled asphalt pavements (RAP) and recycled asphalt shingles (RAS), modifying binders to be more recyclable and working with other industries when it came to sustainability.

Worker concerns included health and safety considerations for employees, along with greenhouse gas emissions and carbon footprint. Talk in the worker session included the reduction of exposure in mastic work group, the recruitment of new asphalt workers, protecting the health of all workers and carcinogenicity testing.

When the group reconvened to discuss the separate sessions, a few common themes emerged from the hours of useful discussion. A need for speedier innovation and implementation was evident. Offering a consistent message to the public was considered vital. Discovering interdependencies in the asphalt industry value chain was recommended. An awareness and understanding of future demand paths proved to be important.

“We see in both technology and society that systems today are so interrelated that what impacts one seemingly insignificant sector can have a ripple effect on other more major issues. Finding common threads in the four focus areas wasn’t a surprise. The key work is to find how to weave the common threads together,” said Asphalt Institute Director of Research and Laboratory Services Mike Anderson.

Organizers are now compiling the discussion and findings into a comprehensive STAR Symposium Report. The report will include an executive summary, attendee listing and chapters on economics, performance, sustainability and worker concerns.

An electronic version of the report is available free to the public.

“The outcome (of the event) will give guidance on strategic research for the foundation. But will also serve as a menu of potential areas of contribution from other parties,” said STAR Chairman Martin Carlson in his closing remarks.

Plans are in development for another installment of the STAR symposium in the coming years.