Put it to the test

The year was 1993 and maybe your father worked in the asphalt industry. The Pentium microprocessor was introduced by Intel. Windows NT 3.1 was released by Microsoft. The average cost of gasoline was $1.16 per gallon. A Sony Walkman cost $29.98 and Superpave came out providing us with a new performance-graded (PG) binder specification (currently known as AASHTO M320) that utilized a new test method, AASHTO T315.

This new binder specification/test method evaluated the binder’s performance with respect to permanent deformation (rutting). During this same time, there was an increase in the use of polymer modified binders. To ensure they would be receiving polymer modified binders, many states began using additional specification tests such as the Elastic Recovery Test, AASHTO T301. Developed around unmodified (neat) asphalt binders, it was soon recognized that T315/M320 did not properly characterize the rutting performance of all modified binders – especially those modified with elastomeric polymers. The PG specification was subsequently refined by incorporating a new test known as the Multiple Stress Creep Recovery (MSCR) test AASHTO T350 and its corresponding binder specification AASHTO M332.

In 2012, the Northeast Asphalt User-Producer Group (NEAUPG) Binder Committee initiated a process for the regional implementation of this new PG (MSCR) binder specification. QC test results were compiled from suppliers in the region for their polymer modified PG 76-22 and PG 76-28 binders when tested using the new MSCR test method (see Figure 1). Based on the test results it was concluded (or at least anticipated) that some of the then-current binder formulations (polymer dosages) would likely change should the new MSCR specification prevail. It did prevail – with the understanding that the old PG specification (M320) did not properly characterize modified binders and with the confidence that the new MSCR specification did capture the benefits experienced by agencies with polymer modified binders. So, in 2013 the northeast states began implementing AASHTO MP19 (now M332).

• Do these new binders contain the same amount of elastomeric polymer as in the past?

• Are there any adjustments needed to the elastic response curve to ensure polymer dosage?

Six binder suppliers in the Northeast U.S. participated in a study to find answers to these questions. Each of the suppliers put together seven different binder blends in their laboratory using actual production materials (polymer modified binder concentrate and base asphalt binder). The seven blends consisted of three “E” grades, three “V” grades, and one “H” grade. Target Jnr values at 3.2 kPa tested at 64C for the blends were: 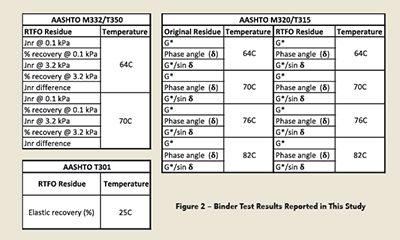 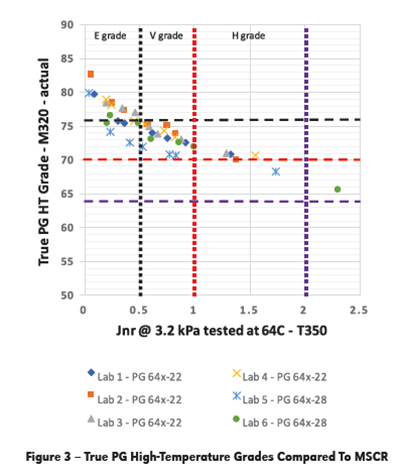 While not part of the intent of this study, it was interesting to see that all V-grade blends exceeded a true PG high temperature of 70°C and all H-grade blends exceeded a true PG high temperature of 64°C. When comparing polymer content, AASHTO T301 Elastic Recovery is a great tool that indicates quantitatively that elastomeric polymer is present – the higher the elastic recovery the more polymer is present. A specification criterion of 65 percent minimum recovery has been used in the past. All E-grade blends in this study exceeded this minimum value (see Figure 4). This data would also suggest that the minimum elastic response from the MSCR test should be no less than 43 percent to have equivalent polymer loadings before MSCR was implemented. The current minimum elastic response for an E-grade from the elastic response curve in AASHTO R-92 is 35 percent. While not used in the northeast, many states have used a maximum original phase angle of 75 degrees to determine polymer presence. All but one of the E-grade blends met this criterion (see Figure 5). This data also supports a minimum elastic response of 43 percent for the MSCR test. 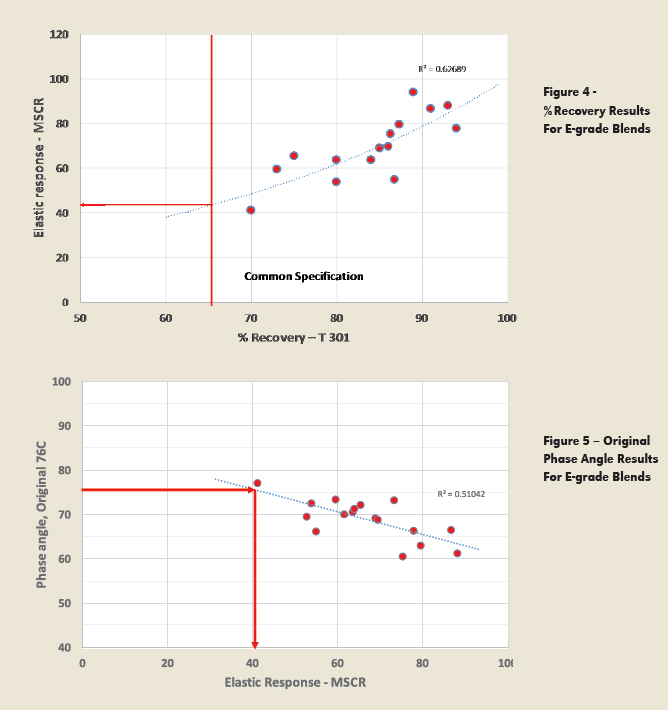 So, has anything changed? Maybe. But slight reductions in the M320 high-temperature PG grades for today’s M332 PG 64E-xx binders have not lead to any field performance (rutting) issues in the northeast. This continued performance is likely attributed to the maintained polymer percentages matching those of your father’s M320 binder.

Harder is an Asphalt Institute Senior Regional Engineer based in New York.

Click this link for a larger view of the graphics in this article.