Big data has arrived in the asphalt industry. The term “big data” is a relatively new buzzword used to describe extremely large data sets that are computationally analyzed to identify patterns and trends.

Computing power and capabilities improve analytics and have begun to dominate how a broad range of industries make decisions. If asked to provide examples of “big data” and analytics, many would probably refer to sports teams, social media or tech giants such as Amazon and Google. A less common response would be the asphalt industry.

However, the digital age has led to the development of intelligent systems that allow users to monitor the paving and compaction of asphalt mixtures in real time from any location. There is an opportunity to leverage this information to improve pavement quality.

Density is the primary parameter used to assess pavement quality. Recent studies conducted by the Federal Highway Administration (FHWA) concluded that a one percent improvement in density corresponds to a 10 percent improvement in pavement life. Density is influenced by materials and workmanship. Traditionally, density was assessed solely based on localized measurements of the end product. Intelligent construction systems provide a more global view of the paving process and incentivize workmanship best practices by monitoring mixture delivery and compaction during construction.

Specific technologies are the Paver Mounted Thermal Profiling (PMTP) unit and intelligent compaction capable rollers. The equipment is now being implemented after use in various demonstration and pilot projects since the mid-2000s.

The PMTP and IC (Intelligent Compaction) rollers require a GPS (Global Positioning System) unit on the project to monitor various aspects of construction and relate them to spatial position. They also include a digital display mounted on the equipment. Data collection is a continuous process that involves at least three data sources. Readings from both devices and location data are exported directly to the cloud and input to a trademarked analysis software called Veta.

The software conducts analysis to determine compliance with specifications related to mat temperature distribution and roller coverage. Relative to current practice, this process represents a significant advancement as signals from the machine can be processed and analyzed without any user interaction.  Furthermore, the system in place allows for manual input of conventional single point data (i.e. core density) so traditional data can be combined with the global information from the intelligent construction systems.

The PMTP system is used to track paver movement and distribution of pavement mat temperatures to quantify thermal segregation. The ability to achieve density is driven by placing the mix at the appropriate compaction temperature. Inconsistent (i.e. segregated) mat temperatures present a higher risk for variations in density. A recent Minnesota Department of Transportation (MnDOT) specification for thermal segregation provides an incentive for mat temperature distributions less than 25°F and a disincentive for areas with temperature distributions greater than 50°F. Figure 1 provides a visual comparison of incentive versus disincentive thermal profiles. Both profiles were generated from 2018 projects, PMTP data was analyzed using the trademarked web-based Moba Pave Project Manager application. 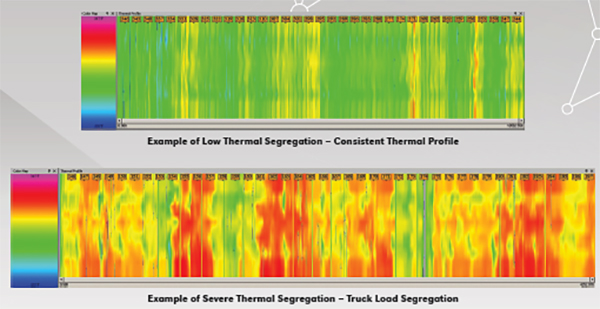 Specifications based on temperature differentials provide the agency assurance of product consistency and incentivizes the contractor to improve paving practices. The thermal segregation data coupled with other information collected by the PMTP system provides tangible verification of paving best practices such as using a materials transfer vehicle, not running the paver hopper dry and maintaining consistent paver speed. As the industry transitions to a younger workforce, this information is a valuable teaching tool to demonstrate the attributes of a good paving project and the consequences of not following best practices.

Although important, controlling mix delivery and placement is only half the battle. Intelligent compaction rollers close the loop on achieving consistency by providing a tool to measure underlying support conditions and remove subjectivity from the compaction process. Mixture density behind the paver is 85 percent to 88 percent, the mix is further compacted by a series of rollers to achieve final in-place density targets that range from 92 percent to 94 percent.

In traditional practice, the roller pattern is set early in the project and verified by in-place density measurements. It is the responsibility of the roller operator to count passes and keep track of starts and stops, presenting risks for inconsistencies due to human error. The IC-instrumented rollers improve consistency by tracking the number of passes made over a given area. The IC rollers also include a stiffness gauge which is used to map the project and identify soft spots prior to paving. These areas are replaced with more stable material to improve support conditions and facilitate achieving density.

The need for IC roller technology is demonstrated in Figure 2. In this example, the IC roller was used only for observation. As shown, the target rolling pattern was not achieved. Most of the pavement area received only one or two passes and the coverage was inconsistent across the width of the lane. IC instrumentation significantly improved consistency. From the perspective of the operator, the software interface changes colors with each pass, providing a visual indicator when the target coverage is achieved. The concept of using the color output as a pass/fail indicator also applies to evaluating the stiffness of underlying layers.

The IC roller can be used as a contractor QC (Quality Control) tool or for acceptance. Specification recommendations from the FHWA Intelligent Compaction Pooled Fund recommend disincentive for any sublot with less than 70 percent target roller coverage. To date, stiffness measurements are used predominately as a pre-construction mapping tool.

The implementation of these technologies was supported by FHWA Transportation Pooled Fund #954, which was initiated in 2008. It included 12 states and significant collaboration with equipment manufacturers and contractors. Two main deliverables were AASHTO standards for PMPT (PP-80) and IC (PP-81). The pooled fund was led by Minnesota DOT, which is considered a leader in IC technology. Minnesota DOT incrementally deployed PMPT and IC technology for projects greater than four miles in length. Implementation started in 2014 and was completed in 2018.

Other states have followed suit. As of 2017, 23 states have intelligent compaction specifications for asphalt in various stages of development. As the use of this technology becomes more prevalent specification limits will be refined. However, preliminary results indicate that there is a clear benefit to both agencies and industry by integrating intelligent construction systems into pavement construction.

Hanz is the Technical Director for MTE Services/Mathy Construction in Wisconsin.