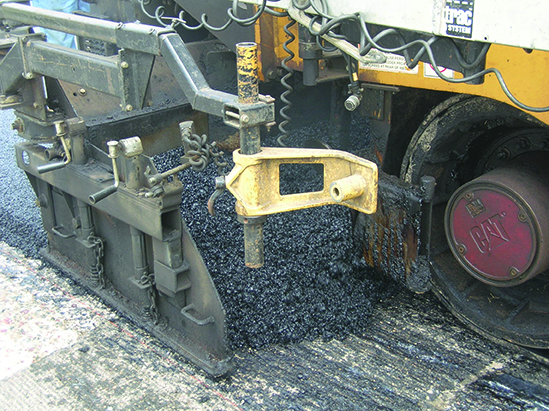 High volume routes constructed with asphalt pavement in the Minneapolis/ St. Paul (MSP) metro area have historically been few and far between.

Recently, MnDOT conducted an extensive pavement design review that included newly constructed pavements constructed with PG binders and upgraded aggregate characteristics meeting SuperPave criteria. The performance of several high-volume routes around the MSP metro area constructed with premium asphalt specifications resulted in the elimination of the asphalt moratorium on routes over 10 million ESALS. The new MnDOT pavement design manual issued in February of 2016 allows the use of flexible or rigid pavement types on all levels of traffic in Minnesota.

One project of many that provided the basis for eliminating the high-volume asphalt moratorium is a section of U.S. Highway 10 in Anoka County. This segment carries over 90,000 vehicles per day, including 4,500 trucks and was reconstructed in 1998. The section consisted of a 4-foot subcut with a granular backfill topped with 6 inches of MnDOT class 6 aggregate base and 9 inches of SuperPave asphalt mix. The first 5 inches was a base course mix that used a PG 58-28 asphalt binder with a nominal maximum aggregate size (NMAS) of 19 mm. It was followed by a 2.5-inch lift of 12.5-mm NMAS mix and finished with a 1.5-inch lift of 9.5 mm NMAS mix as a wearing course.

This index value ranges from 0.0 – 5.0. In Minnesota, a 5.0 RQI rating would require a measured pavement roughness of 0.0 using the International roughness index (IRI). In reality, the maximum RQI achievable on a newly constructed surface is in the 4.0 – 4.2 range.

The RQI is a determining factor in the MnDOT pavement management program as to when a pavement should be rehabilitated or reconstructed. An RQI value of 2.5 is regarded as the lowest RQI acceptable on the state system and will trigger some type of major pavement restoration. The table below shows MnDOT’s rating based on RQI range.

The U.S. 10 project constructed in 1998 has exceeded current design expectations. The newest MnDOT pavement design manual uses a time to first overlay of 20 years for the LCCA rehabilitation schedule. This assumption would logically assume that the RQI had degraded to the 2.5 threshold.

The U.S. 10 project was evaluated in three segments on the westbound and eastbound lanes in 2015. The RQI values for these segments range from 3.1 to 3.8, averaging 3.4 at year 17. MnDOT generated pavement life curves in 2014 estimated that the worst sections will not reach the 2.5 RQI threshold until 2021 and the best sections in 2028. Projected time to first overlay of 22 to 30 years on an almost 100,000 ADT (average daily traffic) roadway is solid performance that cannot be ignored.

From 2006 to 2008 MnDOT reconstructed an 11-mile section of U.S. Highway 212 in Carver County on a new corridor alignment that serves as a major commuter route from the Chaska and Chanhassen areas of the metro area. The majority of the design traffic on this project was over 10M ESALS and scheduled to be a rigid pavement type.

The Minnesota Asphalt Pavement Association pressed for an alternate bid on the western portion of the route because that segment fell just under the 10M ESAL threshold. Alternate bids for PCC and asphalt were accepted and the asphalt alternate prevailed in the final bid tabulation.

The typical section for the asphalt segment was 9 inches of asphalt pavement on 6 inches of MnDOT class 6 aggregate base, all of which was supported by a 24-inch modified select granular borrow (primarily sand). The asphalt pavement consisted of two 2.5- inch lifts of 12.5-mm NMAS SuperPave mix with PG 58-28 binder followed by a 2-inch lift of 12.5-mm NMAS mix containing PG 70-34 binder and surfaced with a 2-inch lift of stone mastic asphalt (SMA) also using PG 70-34 asphalt binder.

After analyzing the pavement condition survey data in 2015, the 2008 asphalt segment held a RQI of 3.6. Field observations also recorded that there was only one thermal crack in the entire 2.7-mile segment. The MnDOT pavement performance curves indicate this segment of Hwy 212 may not reach the 2.5 RQI rehabilitation trigger level until 2031. If so, that would be 23 years after the pavement was placed into service.

Premium grade SMA mixes are becoming more widely utilized to rehabilitate existing surfaces. Whether over a rigid pavement or in a mill and overlay, the long-lasting combination of highly modified binders and hard, angular aggregate in today’s SMA mixtures are providing outstanding value in this wet northern climate. The smooth and quiet surface, along with rapid project completion time, makes SMA a popular choice with travelers and is fast becoming the resurfacing mixture of choice in the Twin Cities.

This major north/south route in western Minneapolis is an old Hennepin County rigid pavement inherited by MnDOT in 1987. The original pavement is believed to have been placed in the late 1960s or early 1970s. CPR was performed during 1983–1985 and the route was overlaid with asphalt in 1998. The pavement was scheduled for rehabilitation in 2013.

A 35-year life cycle cost analysis was performed with three pavement alternatives: a 4-inch SMA mill and overlay, an 8.5-inch overlay over rubblized concrete and a 7-inch unbonded concrete overlay. The 4-inch SMA alternative was selected based on LCCA and constructability.

The project was constructed using temporary directional closures on weekends in order to accommodate the 90,000 cars and 4,700 trucks that traverse the route daily. Nearly 60,000 tons of SMA was placed on this 7.5-mile project over eight weekends including grade lowering excavations under the overhead structures.

“We are seeing excellent performance from the highly modified SMA mixtures in-place around the metro district. Advances in our quality management system and teamwork between MnDOT and contractor field and laboratory staff greatly contributed to the success of these pavement sections,” said Tim Clyne, MnDOT Metro District Materials Engineer.

The excellent performance of these projects and many other routes in and around the Twin Cities has given MnDOT confidence in eliminating the asphalt moratorium on high volume pavement design. This new generation of pavement is proving that quality materials, design and construction practices will yield long-life pavements that are smooth, quiet and rapidly constructed – elements that are vital in maintaining a sustainable transportation system in Minnesota.

Blow is an Asphalt Institute Senior Regional Engineer based in South Dakota.