As a little niño, I loved watching the old “Zorro” television show. Walt Disney Productions…not surprisingly. Zorro was a nobleman pretending to be self-absorbed with his wealthy lifestyle but secretly donning a mask to hide his appearance (a ploy that I don’t think will work in today’s CSI-crazed society, by the way) while he fights corruption and injustice with a foil and slashes Z shapes into wood, clothes and skin to leave his mark. Way cool. Probably responsible for my otherwise inexplicable love of the “¡Three Amigos!” and “Nacho Libre.”

If I see “z” today I think of something a little different…”z-scores”. Ah, to be young again.

Z-scores are a way of comparing an observed result to the mean by considering the standard deviation (a term that captures how spread the data is within a set of values). Statisticians are probably berating me now for oversimplifying the explanation. The rest of you are probably thinking “that was oversimplifying it?”

The concern with any new test, like the Multiple- Stress Creep Recovery (MSCR) test, is how tight the standard deviation is. The lower the standard deviation, the more confidence the supplier or agency can have in the value of the result. As an example, the table shows data from PG Asphalt Binder Sample 245. 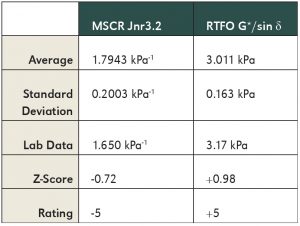 This data makes sense as lower values of Jnr3.2 should correspond with higher values of G*/sin δ. Even though the lab data shows approximately the same deviation from the mean for Jnr3.2 and G*/ sin δ, the higher standard deviation for the Jnr3.2 test means that the lab z-score is lower – indicating that it is, relatively speaking, closer to the mean.

The takeaway – it isn’t enough to see great scores on your PSP report. You need to look further into standard deviation to really understand testing variability. The lower the standard deviation, the more confidence you can have in the test result.

When you get your results, please note that we don’t recommend allowing your technicians to slash your lab number into the wall.

Anderson is the Director of Research and Laboratory Services for the Asphalt Institute.