Regardless of the methodology employed, an assumption of all asphalt pavement thickness design methods is that layers will be working together as a single uniform unit. This is achieved only with proper layer bonding. Tack or bond coats function as bonding agents between each lift of a pavement section to create the desired pavement structure. A tack coat is defined as a sprayed application of asphalt material upon an existing asphalt or Portland cement concrete (PCC) pavement prior to an overlay, or between layers of new asphalt concrete by a 2016 FHWA TechBrief.

A question arises, “How do you test the bonding characteristics of a tack coat?”

A variety of researchers have investigated and reported on the measurement of interlayer bond strengths of pavements. The procedures that have been developed can generally be classified based on the method in which the load is applied. The loading may be applied in shear, which is further subdivided into direct shear or torsional shear, or in tension. Testing may also be described as destructive versus nondestructive, laboratory versus field or cyclic versus a monotonic loading to failure. The loading style will be used to review the two most popular interlayer bond strength testing styles – direct shear and tension testing.

Laboratory linear shear testing is a popular option for both researchers of bond characteristics as well as agencies. The attraction to this methodology may be attributed to the relative simplicity of the procedures and the utilization of commonly available laboratory equipment. Moreover, the largest study on tack coats and pavement layer bonding ever (National Cooperative Highway Research Project NCHRP 9-40) recommended shear testing, as reported in NCHRP Report 712 “Optimization of Tack Coat for HMA Placement.”

AASHTO TP 114-17 “Provisional Standard Method of Test for Determining the Interlayer Shear Strength (ISS) of Asphalt Pavement Layers” was produced by the 9-40 researchers and is currently progressing through the AASHTO Subcommittee on Materials. It offers a potential national standard for the testing of interlayer bond strengths. The shearing head for this test is seen in Figure 1. 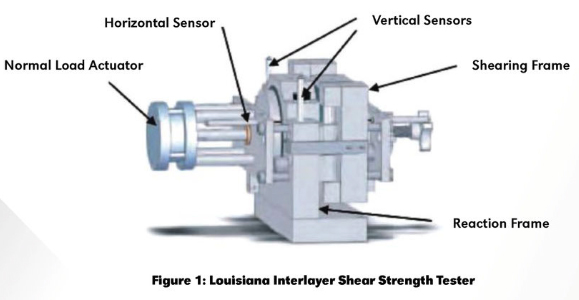 Various states have also developed test methods for interlayer bond strengths using a Marshall or Universal testing machine in linear shear. These methods share some commonalities. They are typically performed on four- or six-inch specimens produced in a laboratory or collected via field coring. A shearing jig is placed into the testing machine with the test specimen at a specified test temperature, generally about 77°F. The test specimen is positioned so that the interface between two layers is centered within a gap between a fixed and a moving portion of the shearing head. A normal load is sometimes employed. The specimen is then loaded to failure at a specified loading rate, commonly two inches/minute. The results are reported in terms of pounds per square inch (psi) by dividing the peak load in pounds, by the cross-sectional area in square inches of the specimen. 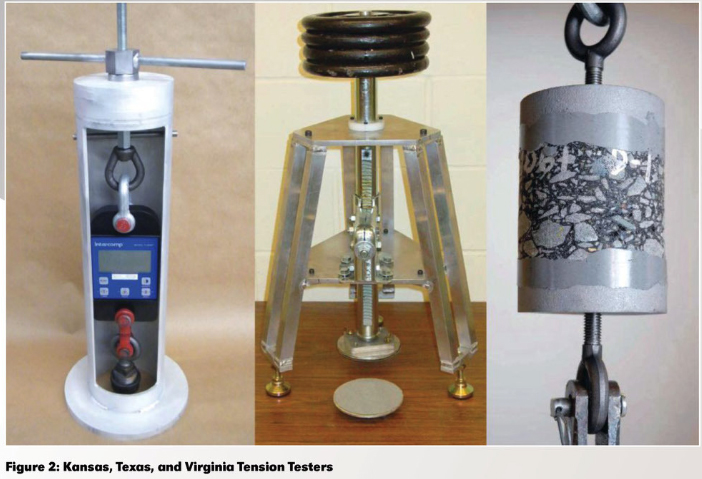 Commonly recognized positive merits of shear testing include that it is quick to perform, it is repeatable, it uses lab equipment that is commonly available, it cleanly ranks materials and it has various standard testing methods.

Measurement of bond strength via tension is the second most popular method, based on current information. Three states (Kansas, Texas and Virginia) have established standard test methods for analyzing interlayer bond strength via tension. The standard test methods are KT-78, Tex-243-f, and VTM-128, respectively. A variety of researchers have also used tension to evaluate tack coats.

The test for the tension option commonly involves two-, four- or six-inch lab or field produced specimens. Conditioning via a seating load is required by some procedures. At the established test temperature, tension is applied by the necessary means until failure or a predetermined maximum load is reached. Results are again reported in psi based on peak loading and cross-sectional area.

Recognized benefits of tension testing include that it can be done in the field or in a laboratory, it is a reasonably quick test to run, it has good repeatability and it has cleanly ranked materials.

A recent NCHRP synthesis of tack coats was authored by Asphalt Institute Senior Regional Engineers Danny Gierhart and Dave Johnson. A survey tool was employed to ascertain the current state of the practice by state departments of transportation (DOT). Five questions were asked about interlayer bond testing. Some of the key results are found below.

The survey asked DOTs whether they were currently performing interface bond strength testing. In the United States, 24 percent (12/50) of the respondents indicated that they were (Figure 3). The number of states that perform bond testing has seen a significant increase since the worldwide survey as part of NCHRP Project 9-40. NCHRP Report 712, which was published in 2012, reported that 8 percent of agencies perform testing to measure the bond strength between pavement layers. 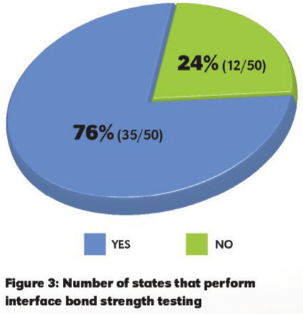 It is worth noting that an additional seven states reported they had recently completed or had ongoing research in this area at the time of the survey. Therefore, it could be assumed that more states may be using bond testing in the future.

Another question asked about the type/style of interface bond strength testing performed by a DOT. As can be seen in Figure 4, eight out of the twelve responding states indicated that they are using a laboratory shear testing apparatus. The second most popular is seen to be field tension testing (4), followed by lab tension testing (2). Both field and laboratory torsion are being used by one state each. Texas and Virginia have used more than one style of testing. 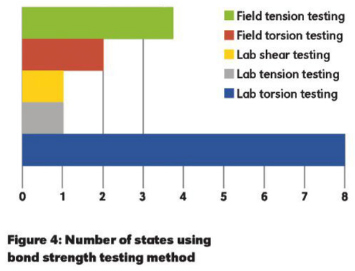 Agencies that use interface bond strength testing were also asked to describe details regarding when they use bond testing. As can be seen in Figure 5, the two most common reasons offered were for forensic investigations (9) and for product evaluation (7). Reasons beyond the simple measurement of bond strength that were offered by states included the evaluation of non-tracking tack coats, and to assist in the resolution of disputes related to tack coat. 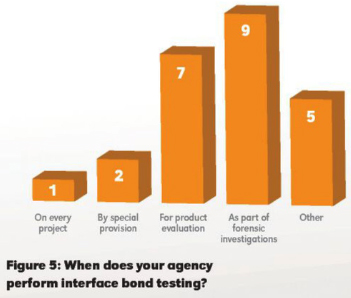 Figure 5: When does your agency perform interface bond testing? 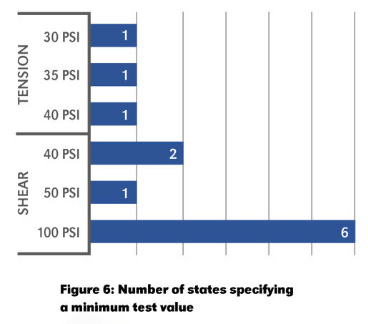 Six states have a minimum shear requirement of 100 psi, two have a minimum of 50 psi, and one indicated a minimum of 40 psi. It should be noted that in the case of West Virginia, their 100-psi requirement is a part of percent within limits system as a lower specification limit, therefore contractors will need to target a value above 100 psi.

Regarding tension testing, Virginia uses a similar approach to their analysis of shear results. For milled surfaces, they again test three cores with a minimum average of 40 psi, with no single value below 20 psi. If they are testing an unmilled surface, the average from three tested cores must be 30 psi, again with no tests falling below 20 psi.

One state reported that they are in the process of determining what they deem to be an acceptable value.

An increasing awareness of the importance of tack coats and their contribution to pavement performance is evident in the asphalt world. While recognition of the need for proper bonding of the various layers in a flexible pavement is not new – a keener awareness of tack coat application quality is being seen at many DOTs.

The Asphalt Institute and FHWA presented a four-hour workshop on tack coats in 46 states in 2015-2016. These workshops reached about 2,700 attendees. An additional 3,100 attended conferences and other industry events where presentations on tack coat’s importance and best practices were made.

State-sponsored research on interlayer bond testing is also increasing. Seven states have recently completed or have ongoing research in this area. Moreover, 12 DOTs are currently using interlayer bond testing for product evaluation, forensic analysis, dispute resolution and quality assurance testing. Therefore it would appear that even more agencies will be potentially using this in the future. If this indeed develops, then the trend of more agencies testing interlayer bond strength will continue. This is good for asphalt pavements as their performance can only be maximized if they are properly bonded. As at the National Center for Asphalt Technology test track has shown, pavements with good density, but poor bonding are subject to premature failures. But that is a subject for another day.

Johnson is an Asphalt Institute Senior Regional Engineer based in Montana.