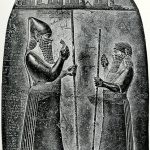 Asphalt is an amazingly creative substance with a long history of diverse use. It has been used in countless ways for centuries by many different cultures around the world.

Records show that the first use of asphalt was probably by the inhabitants of the Euphrates river valley in southeastern Mesopotamia, which is now Iraq. In early years Iraq was called Sumer or Accad, and later, Babylonia. Many natural deposits of asphalt were found in this region between the Nile river in Egypt and the Indus river in India.

An ancient legend tells that, as a baby, King Sargon of Accad was placed in a reed basket coated with asphalt by his mother, Itti-Bel, and set adrift on the waters of the Euphrates river around 3800 B.C. This legend corresponds closely with the story of Moses being set adrift in the Nile river in an asphalt-coated basket.

The early uses of asphalt include cementing bricks together for the construction of buildings and pavements and for protecting exterior masonry surfaces. It was also used for trowling the surface of interior floors and stair treads, and for waterproofing baths and drains.

Excavations at Teli-Asmar, 50 miles northeast of Baghdad, on the eastern bank of the Diyala river, reveal that the Sumerians used asphalt for building construction between 3200 and 2900 B.C.

Asphalt in the Bible

Historians believe that Noah used asphalt in the construction of the ark. The Biblical text reads that the ark was treated with “pitch” (a bituminous substance) inside and out. Canoes and dugouts in the early days were also made watertight with pitch.

There are numerous other references in Christian scripture to what we now know was asphalt.

The book of Genesis states, when describing construction of the Tower of Babel around 2000 B.C., “they had bricks for stone and slime for mortar.” In the Septuagint, the Greek version of the Bible, the word slime is translated “asphaltos”, and in the Latin version, “bitumen.”

The second chapter of Exodus states that the basket of bulrushes (wetland plants) where his mother put Moses was waterproofed with asphalt. Verse three reads “And when she could no longer hide him, she took for him an ark of bulrushes, and daubed it with slime and pitch, and put the child therein; and she laid it in the flags by the river’s brink.”

The use of bulrushes and pitch was an early method of building boats. As late as the 1960s, boats known as “guffas” were built of woven reeds caulked with asphalt and were used to ferry passengers and cargo across the Tigris river at Baghdad.

The Babylonians were exceptional builders. The Babylonian kings built roadways, retaining walls to keep out the Euphrates river flood waters, battlements and grand palaces. Babylonian King Khammurabi had a building code in 2200 B.C. that showed the comparative costs of coating houses and boats with bituminous mastic.

Excavations in Babylonia have uncovered bricks bonded with asphalt that have remained in place for thousands of years. These excavations also uncovered a large stone tablet describing King Nebuchadnezzar’s building activities. The tablet reveals that Nebuchadnezzar’s father, Nabopolasser, built a retaining wall of dried clay bricks to hold back the Euphrates river from flooding his palace.

King Nebuchadnezzar never stopped building and in many of his works he used asphalt. He built a 370-foot bridge across the Euphrates river near Babylon. The piers were constructed of burnt bricks embedded in asphalt mastic, and the base of each pier was coated with asphalt. Nebuchadnezzar also built large sewers made of asphalt, loam (soil and clay mixture) and gravel to drain the city of Babylon.

The Greek historian Herodotus (484 to 425 B.C.) writes about deposits of asphalt at the city of Hit in Mesopotamia: “There is a city eight days journey from Babylon, where a little river named ‘Is’ flows, a tributary of the Euphrates river. From the source of this little river many gouts (drops or spots) of asphalt rise with the water, and from thence the asphalt is brought for the walls of Babylon.”

There are many references in early writings to the city of Hit as a source of asphalt. George Rawlinson, a British traveler, wrote of his visit to Hit in 1745: “Having spent three days or better among the ruins of old Babylon, we came into a town called Hit. Next to this town is a valley of pitch, very marvelous to behold, and a thing almost incredible wherein are many springs throwing out abundantly a kind of black substance, like unto tar and pitch, which serves all the countries thereabouts to make staunch their barks and boats.”

In describing the Babylonian asphalt deposits around 50 A.D., the Greek historian Diodorus Siculus wrote: “Of all the many wonders occurring in Babylonia, the most outstanding consists of large deposits of asphalt which are found there. So much is found that it not only suffices for many and large buildings, but the surplus is used by the populace.”

Medieval writers often refer to rock asphalts and asphaltites under the name “gagates”, which were derived from the river Gagas or Gages in Lycia, Asia Minor. At the mouth of the river Gagas was said to be a deposit of hard asphalt, which is used, according to the writings of Bishop Marbode of Rennes: “As an amulet to benefit dropsy (edema), diluted with water it prevents loose teeth from falling out, while fumigation with gagates is good for epileptics. It remedies indigestion and constipation, cures magical illusions and evil incantations, and is often used in love potions.”

On his third voyage to America in July 1498, Christopher Columbus welcomed the restorative powers of asphalt for his storm-racked ships. On that voyage, he discovered the Island of Trinidad and the lake of asphalt called Lake Trinidad. It has been said that he moored his ships and caulked their storm-racked seams with asphalt from Lake Trinidad.

Later, in March 1595, Sir Walter Raleigh told of his visit to Lake Trinidad and gives an account of what he called Pitch Lake, or Lake Trinidad: “At Tierra de Brea or Piche, there is that abundance of stone pitch, that all the ships of the world may be therewith laden from thence, and we trimmed our ships to be most excellent good and melts not with the sun as the pitch of Norway, and therefore for ships trading the south parts very profitable.”

Not only as medicine and as storm-proofing for ships, asphalt also had early uses as pavements for roads. Historians have established that around 1500 A.D. the Incas of Peru constructed an elaborate system of highways, some of which were paved with a composition similar to modern bituminous macadam.

Asphalt is so flexible and its uses so diverse throughout the ages that it moved former Asphalt Institute Senior Regional Engineer Jay Hensley to proclaim, “There’s no question about it, asphalt is the most creative substance on the face of planet Earth.”

Davis is a contributing editor to Asphalt magazine.

Information for this article was taken from “Asphalts and Allied Substances, Volume One–Historical Review and Natural Raw Materials” by Herbert Abraham.