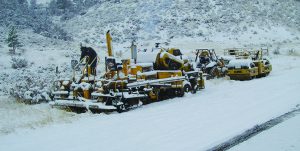 Paving seasons vary across the United States from areas that can pave year round to those that have a very limited window for the laying of asphalt mixtures.

For those that are blessed with a year-round scenario, when conditions are less than ideal on a given day, the solution may simply be to wait a day or two for conditions to improve. For the majority, however, the wait option may not be advantageous as that could be six months before a return to improved conditions.

The primary goal of any paving operation should be to achieve the appropriate degree of compaction. For most dense-graded asphalt mixtures that is at least 93 percent of theoretical maximum density (Rice density).

Experienced paving crews recognize that the same practices that produced the desired level of compaction when conditions were ideal will not always do so as those conditions deteriorate. We hope to provide recommendations on how to best reach compaction goals when it gets cold.

It is helpful to understand some basic parameters that affect every asphalt pavement’s compactability. Compactability is seen as the relative resistance a mix offers to compaction efforts. Generally, asphalt mixtures are designed to be compactable during typical weather conditions during the construction season in a given area.

However, when paving is done early or late in the construction season, cold temperatures can make it more difficult for contractors to achieve optimum density of the asphalt material.

In terms of cold weather paving, what a contractor should be most interested in is the time they have available to achieve compaction. During cold weather, all things being equal, the asphalt mat will cool much faster than it will during warmer weather, shrinking the available compaction time.

The laydown temperature of an asphalt mixture has a major role in calculating the time available for compaction. However, most specifications will have an upper temperature limit. Simply put, moving the mix temperature towards this upper limit, the more time a contractor will have to achieve compaction. Increases in mixture temperature will mean that the binder’s viscosity will be lower at the time of delivery. It is important to recognize that for any given asphalt grade its viscosity will change as the mixture cools. It will become more viscous and stiffer. As such, a mix will become increasingly less compactable as it cools.

There are a number of factors that will affect the time available to achieve adequate compaction, including ambient air and base temperature, wind speed, asphalt layer thickness and atmospheric conditions (to name a few).

Both ambient air and surface temperatures significantly influence the time available for compaction. Of the two, surface temperature is more important. Thermodynamics teaches us that heat transfer goes from the hotter to the cooler mass, and that this occurs more quickly the denser the cooler mass and the greater the temperature differences of the masses. Thus, heat transfer from the asphalt mixture will happen quicker at the interface of the mix and the material it is placed on than from the mix to the surrounding air. It will also cool more quickly on a cooler base.

Wind speed also is a major factor in how rapidly the asphalt mat cools. As one would expect, under windier conditions cooling occurs more rapidly.

Solar radiation is the final environmental factor that needs to be addressed. Solar radiation is measured via solar irradiance. Simply put, solar irradiance is the amount of energy that hits a location on the Earth at any given time. Therefore, under cloudy conditions, less time will be available for compaction than when the same location is sunny.

Fortunately, there are a number of tools available for paving professionals to estimate the time available for compaction. Tools include standardized nomographs, online calculators, computer software and applications for your devices.

Perhaps more useful are the electronic tools for estimating the time available for compaction. The two free compaction time estimators are PaveCool and MultiCool.

PaveCool was developed by the University of Minnesota and is available from the Minnesota DOT at dot.state.mn.us/app/pavecool/index.html. At this site you will find links for downloading the program to your Windows-based computer and Android or iOS mobile devices.

MultiCool is the latest software tool for asphalt compaction time estimations. It is a second-generation product of PaveCool. It was commissioned by the National Asphalt Pavement Association and developed by many of the same experts as PaveCool. It can be downloaded at asphaltpavement.org/multicool. Versions of MultiCool include an online option for computers or mobile devices, Windows-based software, and an Android application. Apple users will have to use the online option.

Both tools allow the user to input a significant number of environmental and material factors. Temperature inputs include that of the mixture, the surface and the air. Wind, sky and base conditions, as well as project latitude are inputted. Finally, the mixture type and binder grades are entered, with more varieties in MultiCool compared to PaveCool. If the user needs to do multiple lifts at one time, MultiCool also allows for that option.

With either of these tools, paving professionals can run multiple scenarios quickly to see how changing conditions will affect compaction time intervals. For example, one might be interested in seeing how altering lift thickness from two 1.5-inch lifts to a single 3-inch lift alters their respective time for compaction. By running these types of comparisons it is easy to see how any of the input factors alter the time interval for getting density.

So what can contractors do to give themselves the best opportunity to achieve compaction when conditions get colder? Here are some important steps that can be taken during cold weather paving:

Ensure that mixture is delivered to the paver at highest allowable temperatures. As mix delivery temperature is typically under the contractor’s control, this is the logical first step during cold weather paving. During production, asphalt mixture should be produced at the higher end of the appropriate range for the project’s asphalt binder. Use of insulated truck beds that are tarped to minimize temperature loss is encouraged.

Work to maintain continuous paver speed. Establishing and maintaining consistent cycling of trucks at the hot plant and the paver is critical to keeping mat temperatures stable as well. This will also allow the paver to run continuously, at a constant paving speed, for the entirety of the shift. Especially when temperatures turn cold, any time the paver stops the mix will be cooling in some locations without compaction. This mix will likely be less compact after the rolling.

Where possible, increase mat thickness. Placement of thicker lifts will inherently give the crew more time to achieve density compared to thinner options. Using the MultiCool software and some typical late-season conditions for my hometown of Billings, Montana, I estimated that a single 3-inch compacted lift offered 60 minutes of compaction time. If two 1.5-inch lifts were evaluated and all the other inputs remained constant, the software predicted 20 and 18 minutes of compaction time for the first and second lifts, respectively.

Adjust the compaction operation to achieve optimum density in a shorter period of time. During cold weather paving, the time available to compact the mixture before it is too cold is greatly reduced. Therefore, contractors must increase the compactive effort to achieve density quickly. Getting the maximum compactive effort in the shortest amount of time is desirable especially when conditions turn cooler. This typically means using the largest rollers in the critical breakdown and to a lesser extent, intermediate modes. Running two rollers for breakdown and, possibly, intermediate modes effectively doubles the compactive effort that is offered in a given amount of time.

Consider a warm mix additive. Incorporating a warm mix additive when conditions get cold can reduce the lowest temperature where compaction can occur, known as the cessation temperature. For most asphalt mixtures the cessation temperature is around 175°F. Using additives can take this value even lower, perhaps 160°F. This one change would add five minutes to the previous example with only 18 minutes of compaction time. Those five minutes represent 28 percent more time for compaction.

Bring your “A” game

As conditions deteriorate and become colder, paving cannot always stop and wait for better conditions. It is then that the pressure to deliver a properly compacted asphalt mat becomes most difficult.

Paving crews that get the mix to the job site at its highest allowable temperatures; that keep the trucks cycling at the plant and paver consistently; that keep the paver moving all day at the same speed and that get the maximum compactive effort in the shortest amount of time will find success even under adverse conditions.

Johnson is an Asphalt Institute Senior Regional Engineer based in Montana.