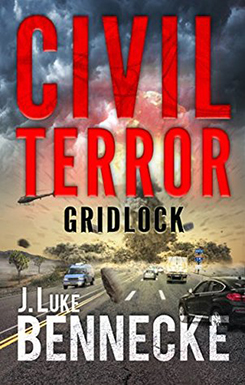 More than entertainment, “Civil Terror: Gridlock” could turn heads and change minds as author J. Luke Bennecke exposes vulnerabilities that autonomous cars, self-driving networks and smart roads could pose. It begs the question: Are we ready?

In Bennecke’s first geek-thriller novel, a west coast ISIS terror cell attacks America by weaponizing California’s SITS network killing nearly 1,800 people in one rush-hour attack. Viktor, the leader of the cell, is a brilliant psychopath who frames Jake and convinces the public Jake is guilty of the conspiracy. One rebel FBI agent sees through it all and partners with Jake to uncover the truth.

Bennecke, a 26+ year veteran civil engineer himself, lures the reader to being pro-Jake by introducing many facets of Jake’s humanity; his family, passions, mistakes, goals and triumphs. Jake is so much like the rest of us you can’t help but want him to succeed against all odds.

Bennecke’s novel could have us all thinking twice about self-driving vehicles and networks. It may be one thing to own a self-driving Roomba, but an interstate system controlling thousands of cars transporting families, pets and loved ones is something entirely different. Are we ready to place our own lives and the lives of those we love in cyber hands?

Self-driving technology is advancing faster than our infrastructure can adapt. The Boston Consulting Group estimates that nearly 25 percent of all miles driven in the U.S. will be from self-driving cars by the year 2030.  We will need to decide sooner rather than later if the benefits outweigh the risks.

Fiscal benefits of self-driving networks are estimated at close to $200 billion dollars annually for our country. More importantly, 30-40,000 lives per year could be saved with this technology.  Risks, however, are plentiful, with terrorists hacking control systems garnering our foremost attention.

What does all this mean for asphalt? Autonomous vehicles being guided by self-driving networks drive with absolute precision in two-wheel tracks. Our roads are not designed to accommodate the weight of every vehicle in two-wheel tracks because human drivers are less precise and use more of the lane. Asphalt roads not reinforced will see rutting that will be costly to repair and treacherous to navigate.

Adaptations will need to be realized in roadway design, lane sizes, traffic signs/signals, pavement materials, pavement markings, state and federal legislation, cybersecurity and so much more.  Additionally, we design our roads to last 30-50 years.  If the consulting group is correct, we have some work to do in the next eleven years.

Enjoy the twists and turns of Bennecke’s gripping novel, then challenge yourself to dig deep and explore the vulnerabilities.  Ask yourself:  Are you ready to pave the way for autonomous vehicles and self-driving networks?

Eiting is DIrector of Asphalt Sourcing for Owens Corning Roofing and Asphalt, LLC.