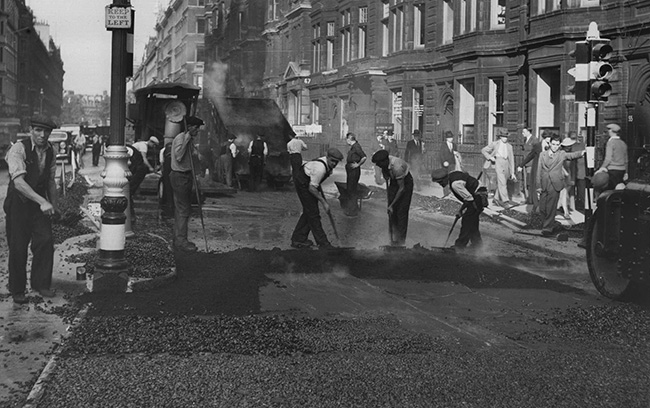 As far back as the time of Moses, asphalt has been used in countless ways. It was not only used for centuries as medicine and as storm-proofing for ships but had early uses as pavement for roads. Historians have established that as early as 1500 A.D. the Incas of Peru constructed an elaborate system of highways, some of which were paved with a composition similar to modern bituminous macadam.

In the 1800s large asphalt deposits were found in France and Switzerland, and the merchants of those countries began to market asphalt products for various uses.

One significant find was the Seyssel asphalt deposit discovered in 1735 in the Rhone Valley in France. Seyssel asphalt was marketed in France under the name “rock asphalt mastic,” and was used for surfacing floors, bridges and sidewalks.

In 1829, an asphalt-mastic pavement, composed of a mixture of 93 percent Seyssel asphalt and 7 percent aggregate was laid as a foot pavement at Pont Morand, Lyons, France, and was also used for surfacing steps. In June 1835, the first mastic-asphalt pavement was laid at Pont Royal, Paris. It was composed of Seyssel asphalt. Later, in 1836, Seyssel asphalt was introduced in London for constructing foot paths.

The earliest case on record of rock asphalt being used in the U.S. for sidewalks is in the portico of the old Merchant’s Exchange Building in Philadelphia in 1838. Seyssel asphalt was used.

The first record of an asphaltic road being constructed in the 1800s was from Paris to Perpignan, France, in 1852, using modern macadam construction with Val de Travers rock asphalt.

The Val de Travers asphalt deposit was discovered in 1712 in the Jura Mountains of Switzerland. Limited marketing of asphalt from the deposit began in the late 1700s and early 1800s.

In 1849, Swiss engineer M. Merian observed that the fragments of rock asphalt that fell from the carts transporting asphalt from the mine at Val de Travers became compressed in the summer months under the cart wheels into a crude asphalt pavement. Merian’s observations led to the construction of a stretch of roadway compacted with a roller in the Rue Bergere in Paris. It was maintained in good condition for sixty years. The first stretch of asphalt roadway in London was laid at Threadneedle Street near Finch Lane in May 1869. It was composed of Val de Travers rock asphalt.

The first asphalt roadways in the U.S.

Historians credit Belgian chemist E.J. DeSmedt for laying the first rock asphalt roadway in the U.S. In 1870, he constructed a small experimental strip with European asphalt opposite the City Hall in Newark, New Jersey.

A year later, in 1871, several asphalt-like pavements were laid in Washington, D.C. The pavements were composed of a mix of crushed rock and sand with coal tar pitch and creosote oil. These pavements provided good service for over 15 years. Also in 1871, a small stretch of asphalt pavement was laid in Battery Park, New York City. Then, in 1872, a larger stretch, composed of Val de Travers rock asphalt, was laid at Union Square.

Development of Bermudez asphalt in Venezuela began in 1891 by the New York-Bermudez Company and was subsequently taken over by the Barber Asphalt Paving Company. Bermudez asphalt was first used in Detroit, Michigan, in 1892 and in the year following was used for pavements in Washington, D.C. It gained rapidly in popularity and is still used today as a road binder, as well as for sheet asphalt pavements.

Before the 1890s highway builders depended on stone, gravel and sand for road construction. Roads were stabilized by adding water that would support horse-drawn traffic. When automobiles hit the road, mud and dust became severe problems.

Road oils and penetration macadam proved to be the answer. They were the most effective deterrent against dust and destruction. Road engineers began to experiment with mixing asphalt and heavy road oils with various sizes of aggregate.

The “Topeka Mix” used 1/2-inch maximum-size stone and opened up the field for asphalt mixes to provide pavement for the first inter-city highways. With the success of the Topeka Mix and the cry of travelers around the nation, the asphalt industry realized that it needed a single voice to represent all the asphalt producing companies—a voice to explain and defend their product, and one that could work closely with the user agencies.

As a result of this need, eleven asphalt companies met at the Union League Club in New York City in May 1919 to form the Asphalt Association, later named The Asphalt Institute.

As automobile traffic increased so did the demand for asphalt surface treatments, penetration macadam, sheet asphalt and various asphalt mixes. During the early 1920s, there was a great need at the state, county and city level for information about the proper use of asphalt for various types of road and street construction.

Toward the end of the 1920s, the Asphalt Institute and the American Farm Bureau Federation joined in a nationwide campaign to inform the American people about the benefits of upgrading the nation’s farm-to-market roads by using local aggregates and cutback asphalt to stabilize the roads.

Asphalt during the depression years

The depression years produced a host of problems but also generated a massive program of public works, including road and airfield construction. The petroleum industry was developing road oils, cutback asphalts and emulsified asphalts that met the nation’s paving needs on primary and secondary roads.

The Civil Aeronautics Association (CAA) was also established during the 1930s. It initiated an extensive airport building program and asked the Asphalt Institute to conduct schools on asphalt paving for CAA personal. More than any other single achievement, the construction of improved roads and airfields launched the U.S.’s great trucking and airlines industries.

From 1931 to 1937 the use of cutback asphalt expanded tremendously. It was economical and provided the speedy repairs necessary during the 1930s. Nearly every commodity experienced a drastic dip in production during the depression years—except for cutback asphalts. Between 1929 and 1936, the total consumption of road oils and cutback asphalt showed an increase of 160 percent, while the total use of asphalt cements for road construction declined substantially.

Cutbacks and emulsions — the road savers

Economy was the watchword during the depression, and nearly all the states adopted less costly types of road construction. Road engineers specified liquid asphalts as surface dressings and asphalt binders for penetration macadam.

In 1931, Pennsylvania began construction of its low-cost Pinchot roads at $6,000 per mile. For many years, Pennsylvania had used tar for surface applications on its roads. State highway engineers had not seriously thought of using asphalt because they knew very little about the product. The Asphalt Institute requested a meeting with Pennsylvania Secretary of Highways Samuel Lewis to explain the merits of cutback asphalt. Asphalt Institute President Bernard Gray explained the ability of cutback asphalts to treat Pennsylvania roads and assured Lewis that the asphalt could be supplied at a substantially lower price.

Bids were requested for both tar and asphalt. There was such a dramatic difference in price that Lewis quickly decided to award the entire contract to asphalt. That year—1932—asphalt producers shipped approximately 30,000,000 gallons of cutback asphalt to the state of Pennsylvania. The state constructed 4,900 miles of asphalt roads, employing more than 48,000 road workers.

The mat roads of Florida, the asphalt surfacing of gravel roads in Michigan and Wisconsin, the prime-coat seal work in North Carolina and the oil mat used on more than 400 miles of roads in Kansas were examples of the extent that asphalt was used. Surface applications in Texas and Oklahoma, and the use of sand-gravel asphalt in Massachusetts, New Hampshire and Long Island, were examples of asphalt’s range and diversity for low-cost roads around the nation.

In 1936, the U.S. Army Corps of Engineers asked the Asphalt Institute to develop an asphalt mix with local sand and loess filler to stabilize the large voids in the Galveston, Texas, jetty and make it impermeable. The mix was dumped in a mass and vibrated into the jetty’s voids, which stabilized the jetty and stopped further movement of the large stones. As a result of the stabilization, many acres of usable land were recovered.

The need for water conservation in the west caused the Bureau of Reclamation to look for ways to reduce water seepage from irrigation canals. Seepage rates of 16 to 18 percent, and as high as 48 percent, persuaded the bureau to ask the Asphalt Institute to research the possibility of using asphalt liners to prevent water loss.

Four types of liner and seepage containers were developed. They included buried membranes, hot-mix asphalt liners, prefabricated asphalt and underseals. Each one of the four was used successfully—with placement of over 7 million yards of the buried asphalt membrane.

Although the beginning of World War II in 1939 changed the U.S. from a depression economy to a booming economy, plans for new road construction and maintenance were put on the shelf. Thousands of miles of roads were maintained minimally or not at all from 1941 to 1945. Production of private automobiles was halted in 1942 and gasoline was severely rationed.

Beginning in 1942 the U.S. Army Corps of Engineers became responsible for all military paving. The Corps turned to the Asphalt Institute to train their engineers in asphalt construction and in the proper construction and maintenance of heavy-duty airfields. When the war ended, these military engineers went back to work at private transportation agencies and state highway departments.

Before the war, the Corps assumed that most military planes would operate from sod fields. But in 1940, when 37,000-pound wheel loads were rolling off the assembly line, the Corps realized that sod airfields would not suffice. At the time, neither the Corps nor any other government agency had pavement thickness design methods for highways or runways, or any other pavement that required wheel loads greater than 12,500 pounds.

The B-29 bomber, with a gross weight of 140,000 pounds, was also under development. The Corps asked the Asphalt Institute to provide design expertise about rock and other asphalt materials for heavy-duty pavements.

By the end of the war in 1944, 1,800 command installations and 2,200 industrial facilities using asphalt had been constructed in the U.S. and around the world. Asphalt paving machines that had been developed for rural paving in the U.S. worked well for military purposes. The capacity, versatility and mobility of these machines surpassed the capabilities of both enemy and allied equipment. And the speed at which asphalt runways were built gave the U.S. and its allies the strategic and logistical edge to win the war.