Asphalt is a flexible, versatile construction and engineering material, with more than 250 known applications. It is used for roofing applications and has been used throughout history in the construction of water reservoirs, dams, and hydraulic structures because of its waterproofing properties. However, most of the asphalt produced, about 85 percent, is used as the binder for different types of asphalt pavements: roads, airports, parking lots, driveways, and paths we use every day. 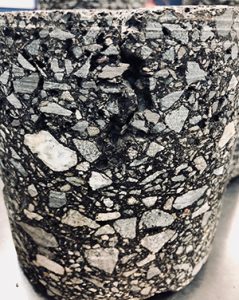 Asphalt is the binder that holds together 90 percent of the world’s paved roads – a somewhat superhero material in the paving industry. Nonetheless, even Superman (the superhero archetype who is virtually indestructible) has a weakness: kryptonite. The story goes that when Superman meets kryptonite, it interferes with the energy that provides him with his superhero powers and renders him useless. In the presence of kryptonite, Superman becomes vulnerable, and too much exposure can lead to his death. Asphalt’s kryptonite is oxygen. When asphalt meets oxygen a series of chemical reactions take place that change its chemical composition, which in turn changes its physical properties. Oxidation of asphalt increases its stiffness, reduces its flexibility and ability to relax stresses and this leads to cracking. The oxidative behavior of asphalt is one of the critical factors contributing to the performance of asphalt pavements. Pavement distresses associated with oxidized or aged asphalt binders are commonly referred to as non-load related distresses: block cracking, raveling and longitudinal or transverse cracking.

Block cracking is a series of large (typically one foot or more), rectangular cracks on asphalt pavement surface that is caused by shrinkage of the pavement due to temperature cycles. Block cracking is usually an indication that the asphalt binder has aged or oxidized significantly.

Raveling is wearing of the pavement surface caused by aggregate particles dislodging due to loss of asphalt binder. This type of pavement distress is usually an indication that the asphalt binder has oxidized and hardened significantly.

Longitudinal and transverse cracks are cracks that respectively run parallel or perpendicular to the centerline of the pavement. They can be the result of poor construction or can be reflected from cracks in base layers. These cracks can also be the result of shrinkage in the asphalt pavement due to low temperatures or hardening of the asphalt binder. In summary, the main impact on non-load related distresses in asphalt pavements is the oxidation and subsequent age hardening of the asphalt binder.

Researchers are constantly investigating cracking index parameters to evaluate the cracking potential of asphalt binders. The idea is that if we identify parameters that can correlate with asphalt flexibility, we can use them to monitor when flexibility reaches a state where corrective action is needed before cracking occurs. One such parameter is ΔTc.

ΔTc was described by Asphalt Institute Research and Laboratory Services Director Mike Anderson in 2011 as part of a research project involving airfield asphalt pavements, to evaluate the relationship between asphalt binder properties and non-load related cracking. The study relied on past research that showed some relationship between ductility (related to flexibility) and the durability of an asphalt pavement. Ductility is an asphalt binder’s ability to be stretched without breaking. ΔTc is calculated using values from the Bending Beam Rheometer (BBR) test by subtracting the BBR m-critical temperature from the BBR stiffness-critical temperature:

How do we determine these critical temperatures?

The Superpave Performance Graded (PG) system sets a criterion for creep stiffness (S) to minimize the contribution of the asphalt binder to low-temperature cracking: S ≤ 300 MPa after 60 seconds of loading at the appropriate temperature.

What about the m-value? The m-value is the rate at which the asphalt binder stiffness changes over time. A higher m-value is an indication that the stiffness may not increase as quickly when temperature decreases. This means the tensile stresses in the asphalt will be smaller as the contraction occurs, reducing the chances of low-temperature cracking. Therefore, the PG system specifies a minimum m-value of 0.300 after 60 seconds of loading at the appropriate temperature. Asphalt binders that are not too stiff at low temperatures and that are able to relax built up stresses are desirable.

The critical temperatures, Ts-critical and Tm-critical, are the temperatures at which the stiffness and m-value specification requirements are met (i.e. S=300 MPa, m-value=0.300) respectively. They can be determined following ASTM D7643, Standard Practice for Determining the Continuous Grades for PG Graded Asphalt Binders; or AASHTO R29, Standard Practice for Grading or Verifying the Performance Grade (PG) of an Asphalt Binder.

Even though these values are obtained from low-temperature testing, remember that ΔTc is intended to provide an indication of loss of ductility, meaning when the asphalt binder cannot relax the stresses fast enough to prevent breaking. As asphalt binders oxidize and age, their ability to relax stresses at low temperatures diminishes. This would be captured in the BBR m-value and result in a higher (less negative) Tm-critical. In other words, as asphalt binders age, they become more m-controlled.

The ΔTc of an aged binder would be more negative, than that of an unaged binder, and would be more likely to exhibit the pavement distresses described earlier: block cracking, raveling and longitudinal or transverse cracking. This has generated a lot of interest in using ΔTc to characterize asphalt mix containing Recycled Asphalt Pavement (RAP) and Recycled Asphalt Shingle (RAS), due to the contribution of highly oxidized asphalt from these recycled materials.

ΔTc can be measured from virgin asphalt and asphalt recovered from mix. Research done by Reinke et al. has shown that ΔTc ranks asphalt pavement performance across different binder types, including polymer modified binders, and binders containing recycled asphalt materials. The study from 2016 showed a very good correlation of ΔTc to total cracking (fatigue and thermal cracking) with a R2 >0.9!

What about a criterion for ΔTc? Agencies interested in implementing this parameter should be testing their binders and comparing the ΔTc results to the pavement performance in order to establish a criteria based on local conditions and experience.

While we may not be able to eliminate asphalt binder’s kryptonite, with a parameter like ΔTc, we can monitor the rate at which ΔTc degrades over time, as an indication of the aging behavior of the asphalt binder, and a signal for when corrective action can be applied before cracking occurs.

Wakefield in an Asphalt Institute Regional Engineer based in Ontario, Canada.