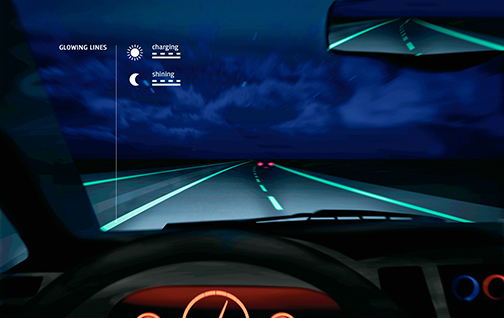 Solar-powered, self-lighting roadways with induction lanes that charge electric cars as they drive. Asphalt pavement that…stores solar energy, using it to melt ice when the temperature drops – or perhaps that energy can be used elsewhere to heat buildings. And if that’s not enough, how about harnessing the vibration energy created in a pavement by passing traffic to generate electricity? These are just some of the futuristic ideas for the asphalt roadway of tomorrow, under development today.

Back in the 1980s, the “Intelligent Highway” concept was all the rage. But the advances then being proposed focused on making cars more intelligent; the roads remained the same.
Fast forward to today: Designer Daan Roosegaarde and Dutch construction firm Heijmans have banded together to create the “Smart Highway” series of projects where the road (not the car) does more than just sit there.

The “glowing lines” concept employs light-emitting marker lines that are recharged by the sun during the day and emit light for up to 10 hours at night. This isn’t just theoretical. As of April 2014, two 500-meter (547 yards) stretches of the N329 provincial highway near Oss, Holland have been equipped with glowing lines.

Roosegarde has many other exciting highway ideas that he and Heijmans are developing into working prototypes. For instance, the “electric priority” will recharge the batteries of electric cars driving on it, by transferring energy wirelessly to the car through magnetic currents. Magnetic transmitter coils within the roadway will induce power generation in a magnetic receiver coil inside the vehicle, which will transfer this power back to the car’s battery.

Meanwhile, temperature-sensitive “dynamic paint” can be used to make illuminated warnings visible only when relevant. For instance, when the outside temperature gets close to a freezing point on a bridge, a dynamic paint warning about potential slippery conditions can appear on the asphalt.

Roosegaarde’s ideas for Smart Highways don’t end there. They include programmable “dynamic lines” that can be remotely triggered to show either solid or dotted lines depending on the amount of road traffic. Interactive street lamps can be installed that only come on when cars approach and can flash when cars are going too fast. As for all that wind generated by passing cars, Roosegaarde envisions using that moving air to spin small wind turbines along curbs to create power to illuminate shoulders at the same time.

There’s nothing like a mid-summer barefoot stroll across Las Vegas Boulevard at noon to reinforce the point that sunlight can make pavements hot. But making this heat actually do something beyond scorching your feet is a challenge.

A British firm called ICAX has developed a way to do just this. Specifically they can transfer the heat energy captured by sunlit roadways and then transfer it to thermal banks. This is done by installing a network of fluid-filled pipes under the asphalt road. The heat is transferred to the fluid, which is then pumped into tubes buried under insulating earth. The dirt retards the heat loss and provides a reservoir of heat that can be extracted by buildings equipped with heat pumps during times of cold weather. ICAX calls this concept “Interseasonal Heat Transfer” (IHT).

Beyond providing buildings with low cost heating, IHT can be used to rewarm roadways during winter, by pumping the thermal banked fluid back into the under-roadway pipes. The released heat can melt snow and ice on an ongoing basis, keeping roadways clear even during snowstorms.

“This concept is already in use at Heathrow Airport to keep the tarmac clear of ice and snow all year round,” said Dr. Heather Dylla; director of sustainable development at the National Asphalt Pavement Association. “It is a powerful demonstration of how much can be done with asphalt paved surfaces when a creative engineering approach is applied.”

The Worcester Polytechnic Institute in Massachusetts has tested a similar concept. They placed a pipe network just below an asphalt pavement, and filled it with water. The asphalt transferred heat to the fluid, which was then available as a hot water source to generate electricity.

Paved roadways vibrate as cars and trucks drive over them. What if that vibrational energy could be harnessed, perhaps to generate electricity?

This concept is not only possible – it has already been proven. A 2011 pilot study into roadway “vibration energy” generation by Holland’s University of Twente and the Dutch province of Overijssel used piezoelectric roadway materials to convert vibrations into measurable power. Basically, the ongoing compression and decompression of piezoelectric crystals in the roadway material generates electricity.

The University of Twente study, which used a piezoelectric embedded strip across the N34 provincial motorway near Hardenberg, showed that enough energy could be generated to power wireless motion detectors to trigger stoplights. The 2013 paper “Piezoelectric Roads in California” written by Stanford University’s student Rex Garling estimated that a 20 mpg car using $4/gallon gas on a one kilometer stretch of piezoelectric equipped roadway would generate about 0.19MJ of electricity. Based on current West Coast electricity charges, this would be about 1/20th of the gasoline cost burned to cross this length of roadway.

A solar option that can work with asphalt

Imagine lining a roadway in part, or in full, with hexagon-shaped solar-powered road surface panels loaded with light-emitting diodes (LEDs). Depending on how they were configured, these solar road panels allow sunlight through their textured glass surfaces and into their solar collectors by day, and then use it to light road markings at night. They can also heat themselves to remove ice and snow as needed (via built-in heating and drainage elements), and perform a number of other power-related tasks such as creating illuminated crosswalks around the clock.

This is the idea behind “solar roadways” spearheaded by electrical engineer Scott Brusaw and his wife Julie. The project has received funding from the U.S. Federal Highway Administration for both its Phase I and Phase II prototypes. They are about to complete its Phase II project by paving a prototype parking lot with its solar road panels.

The beauty of solar road panels is that an entire road does not have to be paved with them. Instead, they can be integrated with existing asphalt pavement construction – providing cutting-edge capabilities in tandem with the proven durability and cost-effectiveness of asphalt pavement.

The roads of the future are coming

The ideas described above illustrate how much is being done today to advance the functionality of tomorrow’s roadways. Members of the asphalt industry are ideally placed to capitalize on these advances, and to marry them with the many improvements in asphalt paving that the industry has already pioneered.

“There is a lot of research being done to capture and store energy from roads,” said NAPA’s Dr. Dylla. “It will be interesting to watch them advance and to see how the science is put into practice.”