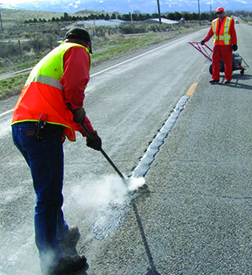 “Paving Patching Practices”, published in 2014 by the National Cooperative Highway Research Program (NCHRP), documents the state of practice for patching potholes and relatively smallscale surface defects in concrete and asphalt pavements in the U.S., Canada and European countries.

The study’s primary focus is on reactive, or temporary, manually installed patches over small areas. But there is also information on planned and machinemade patches, and on patching intended to serve traffic for longer periods, whether temporary or permanent.

The most common distresses in asphalt pavements that require patching include potholes, deterioration around cracks, delaminations, rutting and raveling.

NCHRP researchers concluded from the study that the patches themselves fail because of low quality materials used, installation issues, or simply because the roadway continues to deteriorate. Authors described the reasons for failure as:

• Bleeding or flushing—excess asphalt at the patch surface.

• Dishing—densification of the patch material under traffic, resulting in depression.

• Debonding—lack of adhesion of the patch material to the patched area.

• Raveling—loss of material from the patch.

• Pushing and shoving—surface distortion resulting from instability of the patching material.

Hot mix patching material is a typical asphalt mix produced by a hot mix plant. Cold mix, cold emulsion mix or generic stockpile mix are terms used to refer to asphalt mixes that can be stockpiled and worked when cold.

Proprietary cold mix is similar but uses proprietary materials, often proprietary asphalt binder, designated by their trade names. Proprietary patching materials are sometimes sold in bags rather than being stockpiled.

Semi-permanent patches require more preparation and usually won’t work under adverse conditions. When doing semipermanent patching, repair crews remove water and debris from the area by an air compressor or broom. Then they cut back the sides of the patch to good material and square the patch to vertical by hand or power equipment. The crew then places the patching mix in the prepared hole and compacts the mix with a vibrating plate, vibratory roller or other equipment.

The edge seal method is similar to the throw-and-roll or semi-permanent technique except that the patch has a slight crown to help drain away water and allow some densification under traffic.

In each of the patching techniques, the Strategic Highway Research Program (SHRP) “Manual of Practice” calls for insuring that the patch has a slight crown to help drain away water and to allow some densification under traffic.

The spray injection method uses specialized trailer- or truck-mounted equipment to blow water and debris from the pothole, spray a tack coat into the hole, blow asphalt and aggregate together into the hole and then cover the patch with a layer of aggregate.

Because the aggregate and emulsion are propelled into the patch area with high-pressure air, no further compaction is necessary. Spray patching can be used on asphalt or concrete pavements and is sometimes done under adverse conditions because it can be done quickly.

The throw-and-roll placement technique is widely used, especially under adverse weather conditions, because it has a high productivity rate and can be done quickly. The technique is better than throw-and-go because compacting the material into the pothole makes a longer-lasting patch than simply filling the hole with loose patching material.

Throw-and-roll was found comparable to semi-permanent patches in head-tohead comparisons with three different materials. Throw-and-roll had higher productivity and lower costs and was therefore more cost effective on a lifecycle basis. The success of the throwand- roll technique, however, depended on the use of high quality materials, such as proprietary cold mixes.

Spray injection was found to be a viable option and performed as well as the control patches at all locations. It was dependent, however, on operator skills and required the use of angular aggregates and high quality asphalt emulsion.

The methods best suited for use in winter or adverse conditions were throw-and-roll or spray injection because of the speed in which the patches could be installed.

The first few weeks after placing a patch were the most critical because the material was still setting up. When good materials were used along with proper techniques, patches could perform for several years.

Productivity was evaluated at each test site. Throw-and-roll and spray injection were comparable in terms of tons per hour placed and time spent per patch. The throw-and-roll technique was more cost effective in most cases than the semi-permanent procedure, if quality patching mixes were used. After three-to-four years plus, 56 percent of the patches placed had survived, 31 percent had failed and 13 percent had been overlaid. Spray injection continued to show good performance with a skilled operator.

Many states have specifications for locally produced patching materials as opposed to commercial or proprietary mixes. Examples include California, Indiana and Pennsylvania. In general, clean, angular aggregates were recommended for patching with these specs.

Based on the results, the New Jersey researchers recommended using cost as the determining factor in selecting the material used for patching.

Davis is a contributing editor to Asphalt.