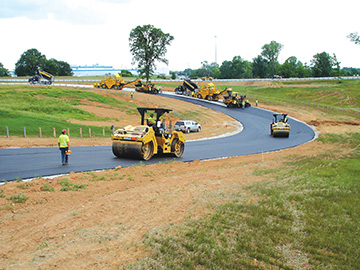 The National Corvette Museum (NCM) in Bowling Green, Kentucky is more than a shrine to all things Corvette: It is also home to a super-smooth 3.2 mile automotive asphalt test track; one whose paving specifications prohibited surface deviations exceeding a minuscule 1/8″ (3 mm) around the track.

Add the requirement for a virtually seamless joint in the center of the course surface, which minimizes surface disruptions for cars traveling at high speeds, and the technical specs for the NCM test track are incredibly precise. This is why the NCM‘s construction contractor, Scotty’s Contracting & Stone of Bowling Green, used 3D grade and slope control systems to construct the earthworks and lay down the mix. Road contractors also refer to this system as 3D milling/paving.

“3D grade control, as used for asphalt roadway milling and paving, is a technique that uses sophisticated positioning systems in conjunction with the grade and slope control of the machines to reproduce virtual designs,” explained A.J. Lee, Global Sales Support Consultant with Caterpillar Paving Products. “The virtual designs – three dimensional CAD drawings produced by engineering firms – contribute positioning data that is used to guide the grade and slope system rather than external references such as stakes, the existing grade or a string line.”

Compared to traditional 2D grade control systems, 3D systems are capable of reproducing roadway grades and slopes within mere millimeters of the engineer’s specified tolerances. “3D grade control is thus ideal for construction or rehabilitation applications where smoothness is paramount, or producing a particular elevation or correcting a road profile is critical, such as airport runways or complex road curves,” said Lee. “In a mill-and-fill application, 3D milling and paving can also maximize the life of a new overlay by ensuring that the overlay can be placed at a uniform thickness.”

National Corvette Museum General Manager Mitch Wright is certainly pleased with the result. “I have overseen four test track construction projects in my time, and the NCM project that was done using 3D paving technology produced the smoothest, most consistent surface by far,” Wright said. “This is an impressive computer/GPS-assisted technology that really delivers.”

Also known as Automated Machine Guidance (AMG) 3D grade control is a system where milling machines and pavers are equipped with computer technology that controls the vertical position of their milling rotors or asphalt screeds. These controls follow CAD data files from the site plan loaded via thumb drives into their onboard computers; cross-referenced in real-time using GPS base stations placed in the work area that feed accurate positioning information to the pavers or mills.

“Rather than milling and paving in reference to the surface below them and on-site surveys, these machines do their work in reference to the engineer’s actual plans,” said Douglas Townes, a Construction Engineer at the Federal Highway Administration who has written extensively about 3D milling/paving. “This allows contractors to do their work within tolerances of 2/100ths of an inch. Any unwanted variations in the surface below is compensated for by the 3D control system. The result is a very smooth, consistent road bed; one that provides a safer, more consistent ride for the vehicles that use it.”

“3D grade control systems allow the operator to produce the correct profile for a road without utilizing external, on-site grade references, which can be flawed,” said Caterpillar’s A.J. Lee. “This means that the work will follow the design rather than a potentially flawed reference.”

Producing the correct profile is important because this accurate profile allows the miller to cut and the paver to lay a roadbed whose thickness adheres uniformly to the road engineer’s design specifications. “This uniformity contributes to longer road life,” Lee said.

Townes has examined how well 3D grade control systems perform – which he refers to as Automated Machine Guidance (AMG) – in a DOT case study of the Florida SR 417 lane-widening project. Available online, the SR 417 case study notes that the 4.1 mile highway section came with 43 milling transition points that left lots of room for human operator error.

In particular, the project crew’s inability to mill/pave more than one lane at a time, in combination with the inaccuracies inherent in traditional milling/paving techniques, “would limit nightly production, introduce opportunities for errors, increase the number of joints, and make tracking and payment more difficult,” Townes wrote in the SR 417 case study. “Furthermore, the [initial] design was based on standard construction practice of fixed depth milling combined with the use of overbuild asphalt to accomplish the profile and cross-slope corrections. Based on this approach, the anticipated overbuild asphalt quantity was 8,200 tons. At $61.50 per ton of asphalt, that would have cost owner about $504,000.”

The Florida DOT responded to this cost by adopting a 3D grade control/AMG approach to the SR 417 project. It was a wise decision: “it was found that overbuild could be reduced by nearly half,” Townes wrote. “This potential savings provided the impetus for an agreement, and the Design-Build contract was modified to allow for AMG to be used.”

The result; using 3D grade control/AMG, the Florida DOT milling/paving of SR 417 resulted in an extremely smooth, consistent asphalt surface at a lower price. Money was saved by milling/paving to specification, rather than focusing on creating a uniform depth throughout: “The overbuild pavement required was significantly reduced from an anticipated 8,200 tons to 2,500 tons, translating to a savings of more than $350,000,” said Townes in the SR 417 case study.

In general, “Paving operations were completed in fewer overall shifts, decreasing overhead and inspection costs and reducing delay for road users.” This is because 3D milling/paving reduces the need to do on-site staking and thus the requirement to have crews do this work on the job.

Staker Parsons Companies of Ogden, Utah has adopted 3D grade control for their larger and more complex asphalt paving projects. “If you are doing a rural road in a flat, open area, there isn’t the same need for precision that you need on a multi-lane urban highway,” said Shane Tinsley, Staker Parsons’ Survey Manager. “When tolerances are an issue, nothing can match 3D paving for cost-effective precision.”

This is the irony of 3D grade control as applied to roadways milling/paving. Although implementing this advanced technology does require adding infrastructure, equipment and crew training, the resulting reduction in man hours for surveying and error correction (plus reductions in paving material used) makes 3D-directed jobs less expensive to execute than traditional milling/paving jobs.

“I love 3D paving for all the money and time it saves our company, while delivering a superior product to our customers,” said Tyler Shepherd, Staker Parsons’ Director of Design-Build Projects. “It is just a better way to pave.”

The bottom line: 3D grade control is a proven way for asphalt paving contractors to do their jobs more accurately, more quickly and more affordably for themselves and their customers.

“3D grade control is becoming more recognized as a good road maintenance practice because its use can contribute to producing a longer-lasting road,” said A.J. Lee. “As contractors adopt advanced machine control and guidance systems across their fleets, the benefits will grow as the machines work together and benefits from the information and efficiencies become evident. We expect to see terms like ‘stake-less’ or ‘paperless’ job sites become more regular and normal.”